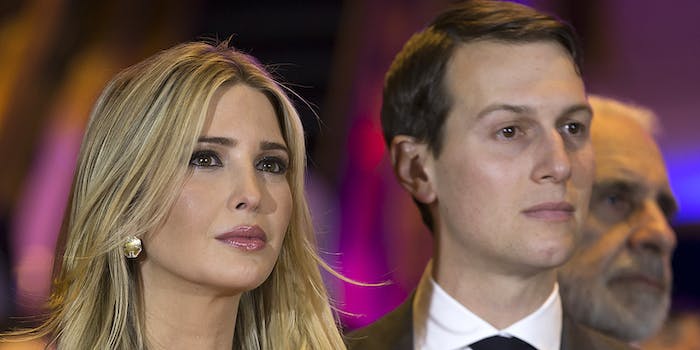 Ever since Ben Affleck and Jennifer Lopez began dating and spawned the “Bennifer” moniker, celebrity couple names have become a thing.

(Or, whatever, they’ve become a thing the media foists upon the public. Do we even know the difference anymore? Do we even care???)

Other times, they’re less successful. When Wilmer Valderrama and Lindsay Lohan had a short-lived relationship, almost no one called them Lohalderrama.

"Javanka" is not a thing. Stop trying to make it happen https://t.co/xOHyeOYq3r

Twitter, upon hearing “Javanka,’ reacted with the kind of grace and panache a toddler shows when you execute their mother in front of them.

Javanka sounds like an island in Indonesia. Also, please move there. Thanks! https://t.co/NC0MrL5TfV

Cut this shit out, we are not calling them "Javanka." https://t.co/Xy54IpO4oH

when combining names trying to make FETCH happen between us and them, STOP TRYING TO MAKE IT HAPPEN #MeanGirls https://t.co/Tx1icFsvdB

I think it kinda works.