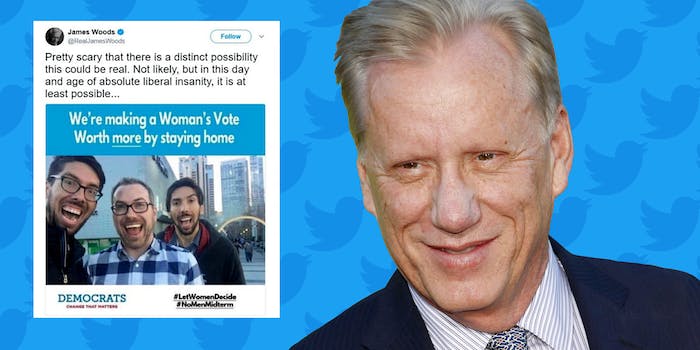 Woods said, 'If you want to kill my free speech, man up and slit my throat with a knife.'

James Woods isn’t exactly known for facts or tact on Twitter, but a tweet from July apparently got him briefly suspended from the platform.

The tweet in question was allegedly posted July 20, and includes a meme that states Democrats were urging men to not vote in the midterms, so they could #LetWomenDecide. Woods tweeted, “Pretty scary that there is a distinct possibility that this could be real.” It appears Woods didn’t do any deeper fact-checking, or he would have known the meme was orchestrated by 4chan. Other versions of the #NoMenMidterms meme were spread on Twitter around the same time Woods tweeted it out.

In an email tweeted out by one of his followers, he lamented that because of the suspension his “1.7 million followers will no longer hear my views,” though that particular tweet wasn’t so much his views as purposely crafted misinformation. This appears to be the reason for the ban, which Woods apparently found out about on Thursday.

From Mr. woods himself. With his permission I asked him if I could share with you all as I know how much you all adore him. #FreeJamesWoods @RealJamesWoods @Twitter pic.twitter.com/WxtpDESWKq

Though his account appears to have been reinstated, so he is now free to tweet about “Me Too hucksters” and insinuate that Stormy Daniels had sex with Mr. Ed—you know, free speech stuff—Woods told the Associated Press: “The irony is, Twitter accused me of affecting the political process, when in fact, their banning of me is the truly egregious interference. Because now, having your voice smothered is much more disturbing than having your vocal chords slit. If you want to kill my free speech, man up and slit my throat with a knife, don’t smother me with a pillow.”

Woods alleged that he would only be allowed back into his account if he deleted the tweet, which he claimed he wouldn’t do. However, a scroll through Woods’ Twitter account on Monday morning shows that his timeline only goes back to Aug. 14.

Woods claimed in November 2016 that he was quitting Twitter because of censorship, but that didn’t happen.