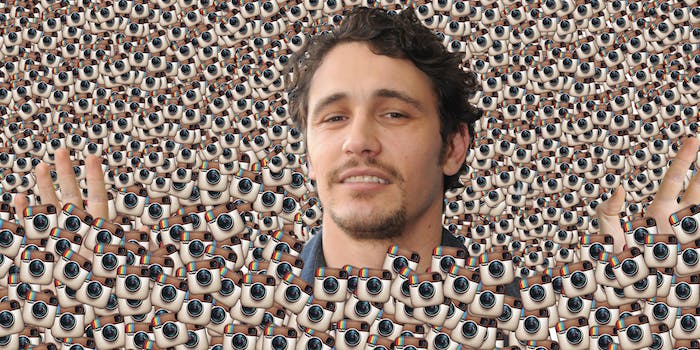 James Franco, Shia Labeouf, and the flood of Internet fame

The Internet has made fame accessible, but is anyone better off for it?

The social media celebrity meltdown has become a regular feature of online life and culture. Whether it’s the now infamous and seminal “#Weinergate” or the recent antics of James Franco, celebrities behaving badly on the Internet has become a cornerstone of the Internet.

Of course, celebrities are hardly the only people behaving badly on the Internet. One of the definitive characteristics of people on the Internet seems to be that they behave badly. That broader fact might suggest that celebrities (who are in fact people too, despite evidence to the contrary) simply behave badly because they are a subspecies of those notorious bad-behavers, the aforementioned “people.”

However, this latest episode with Franco suggests that in fact it’s the other way around. To some extent, we behave badly on the Internet because we are all becoming celebrities.

I doubt I need to remind you about Weinergate. Even for those who avoid the tabloids, such as myself, it was unavoidable. Congressman Anthony Weiner DMed pics of his boxer brief-clad erection to someone on Twitter. He was forced to resign. He ran for mayor of New York. Then he did it again.

More recently, Shia Labeouf, of Transformer fame, plagiarized something. Then apologized, using plagiarized material. Then he committed an act of supposedly performance art called “I’m sorry,” in which he sat in a room with a bag over his head that said “I am not famous anymore” so people could walk through and look at him.

And just in the last 10 days, James Franco, actor and academic, tried to get a 17-year-old to go to bed with him over social media. Of course, that whole thing may be a hoax to promote his new movie, based on his own short story, which features a teacher falling for a, you guessed it, underage student. The previews started the same day the scandal broke—April 1.

But if Franco’s behavior is explained by his promo tour and Weinergate is explained by his sexaholism, Labeouf’s antics are less easy to comprehend. In the New York Times, Franco himself made an attempt, arguing that it was an instance of Labeouf rebelling against his celebrity, trying to reclaim an identity that an industry had coopted—and that this phenomenon has been behind much of the celebrity world’s most strange and nonsensical behavior.

Hasn’t every one of us at some time in his life felt this dissonance? When we’ve been called a bully or a wimp, demonized in one of myriad ways, we have said, “No, that is not me, can’t they see who I really am? I’m the good guy.” We rarely think of ourselves in the terms others apply to us. Everyone who has ever been disliked and talked about behind her back has had to face the fact that someone, perhaps many people, are wrong about who we are.

Of course, the dissonance also occurs—if we are honest—when we are flattered and adored, but it is much easier to take under those circumstances. Then, we hope it is true, rather than insist that it is not. However, if the parade in our honor is sustained long enough and beyond all reasonable bounds, most of us, I think, will start to resent the ticker tape. Some of us will fall into the trap of believing our own hype, but many will realize that whoever is being cheered, it isn’t us.

What makes the experience of being wrongfully accused (or praised) painful is that we want to believe that we own ourselves. But we are social beings and we cannot ignore the views of others. In fact, we belong to a group. If everyone around us sees us differently than we see ourselves, we begin to question our most intimate and precious knowledge: our knowledge of ourselves. And nothing could be more threatening. If you were to discover one day that you were in fact a monster, what would you have to do about it?

The celebrity, according to Franco, finds himself in exactly this prison, amplified with all the force and complexity of modern society and communications technology. It is an ocean of expectation in which the mere droplet of our selves is quickly and easily lost. It is that, again according to Franco, which underlies so much destructive celebrity behavior.

And in the world of social media, is this experience becoming democratized? Are more of us, searching for more fans and followers, for some tiny sliver of fame, exposing ourselves to the same flood?

Paradoxically, it may be the flood itself that attracts some of us. Not liking what we’ve seen in the mirror already, we hope to construct a mirror far more powerful than that on our own wall, one that will show a far fairer self, whose bright light will overwhelm and extinguish the one that we see already and do not particularly care for.

If there were ever a case of being careful what you wish for… The Internet has made fame accessible, and yet fame has likely destroyed more of those who have attained it than it has truly salved.

To know thyself is the greatest wisdom of all—or at least, so the Oracle at Delphi had it. Self knowledge, like that of good and evil, is dangerous, and the question remains if we are ready to wield it.