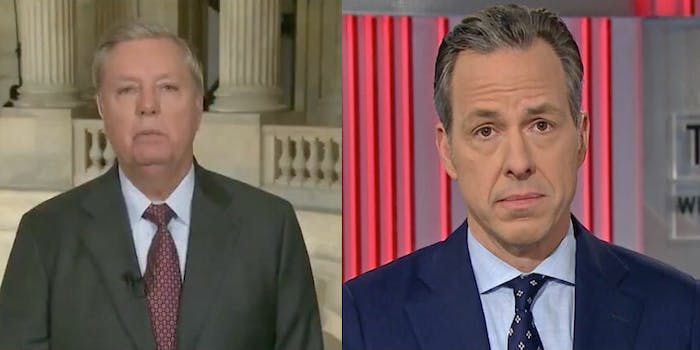 Screengrabs via The Lead CNN/Twitter

'Someone done got Tapped.'

It seems that Lindsey Graham, the Republican senator from South Carolina, forgot that people can look up all of his previous television appearances.

“You know what concerns me about the American press?” he said on CNN this week. “This endless, endless attempt to label [President Donald Trump] as some kind of kook, unfit to be president.”

CNN’s own Jake Tapper had quite the comeback.

Lindsey Graham today: I’m concerned by the media’s attempt to label Trump as a kook or not fit to be President.

Yep, that’s right. Graham called Trump a “kook” and “unfit for office” in 2016. It’s on video, so he can’t deny that he said those things about the current president. Sure, a lot of politicians changed their position on Trump post-election, and now they have to eat their words.

But it’s kind of incredible that Graham is now criticizing the media for apparently saying the exact critiques he made himself.

Someone done got Tapped: https://t.co/L32Sok1D7N

I did not expect the sheer precision of this ownage https://t.co/rEEvdbA8cS

Man, it must be really difficult when you have to sell your soul. https://t.co/1dN3DUdrJB

When you look up "powned" on https://t.co/BXj0StIdT9 this appears in a pop-up window. https://t.co/g2R6bRjY6a

Cheers to calling out politicians who flip-flop—which is a lot of them!