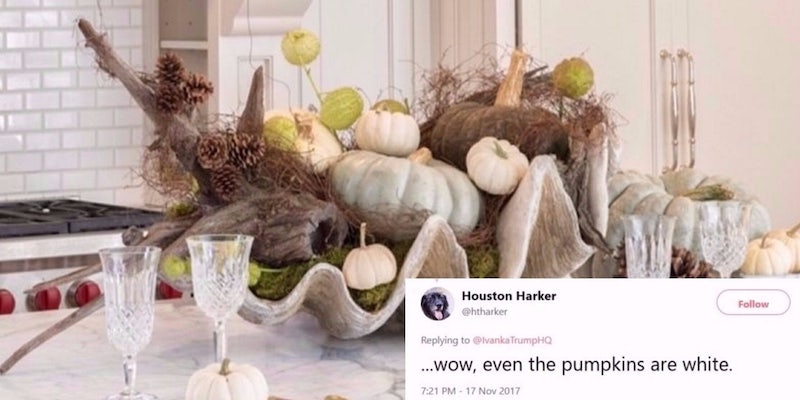 Ivanka Trump roasted on Twitter for this unique Thanksgiving tablescape

It wasn't even her creation.

If you’re the child of the president, you can expect to receive plenty of flak on social media for your extracurricular activities. Whether it’s adding vegetables to breakfast foods or acting like a typical teenager at a concert festival or killing innocent animals so you can take home trophies, a president’s offspring quickly learns that they’re ripe for criticism no matter what they do in their spare time.

That, of course, includes Ivanka Trump.

But as Allison Domonoske learned, even a complimentary tweet from Ivanka Trump’s brand can spell instant Twitter infamy. Domonoske is a stay-at home mother who has a flair for design, and on Thursday, the @IvankaTrumpHQ Twitter account tweeted a photo of a Thanksgiving tablescape Domonoske created.

Unsurprisingly, the backlash was immediate and biting.

…wow, even the pumpkins are white.

As an alternative, consider the lovely simplicity of this stainless steel tray with matching flatware. Not only will it provide a timeless symmetry to your table, it will also be such a kind gesture to help prepare your family for holidays in a more institutionalized setting. pic.twitter.com/9FWpm2bU3e

Perhaps we should let Domonoske explain her thought process. As she wrote on Ivanka Trump’s website, “I wanted a centerpiece that could stay on the kitchen island and last without going out of style. I’ve kept this huge antique shell for about three years and they’re everywhere right now in home décor. When it’s time for Christmas or Hanukkah, you can switch out the pumpkins for another accent …

“I picked up the pine cones outside with my kids and finished off the shell with moss, twine and driftwood that I found at the beach. I love mixing really nice pieces with natural elements and have them play off of each other.”

I imagine that partial explanation won’t matter to Trump’s critics. Because whether Trump makes her creation or simply tweets somebody’s else work, her critics will always think of it as deplorable.