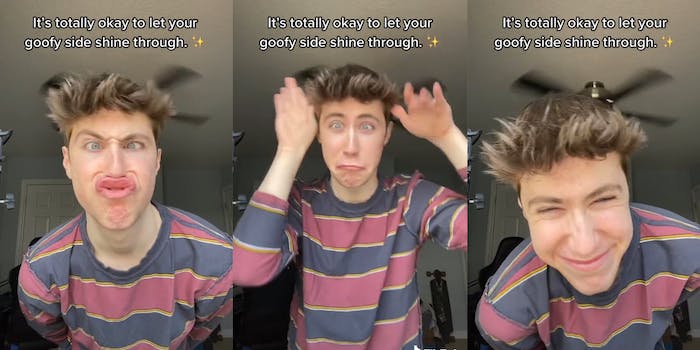 People are stretching the definition of ‘goofy’ with this viral TikTok

TikTok is not feeling this silly, goofy mood.

Andrew Curtis put cringe to the test with his recent TikTok.

On June 23, Curtis posted a TikTok with the caption, “It’s totally okay to let your goofy side shine through.” To illustrate this point, he does a couple of funny faces and dances, then laughs it off.

The video now has more than 21 million views, and it appears from Curtis’ other videos that his “goofy side” is not isolated to one TikTok. But his floofy-haired sincerity drew out some pretty dark definitions of goofy. Like, feigning jumping in front of a train.

User @wheelierin edged her wheelchair a little too close to the stairs as a goof, then followed up with a TikTok pointing out what people missed.

Jordan Belfort is apparently doing reaction videos now. One of the most viral duets, which showed a man jokingly putting a toy gun in his mouth and then to his head, has been deleted from TikTok. However, another user did a similar video.

And then there was this reaction, which kind of sums it up.

There are more than 260,000 comments on the TikTok, and the top ones are not feeling the silly, goofy mood. “How can I delete someone else’s vid?” asked one commenter.