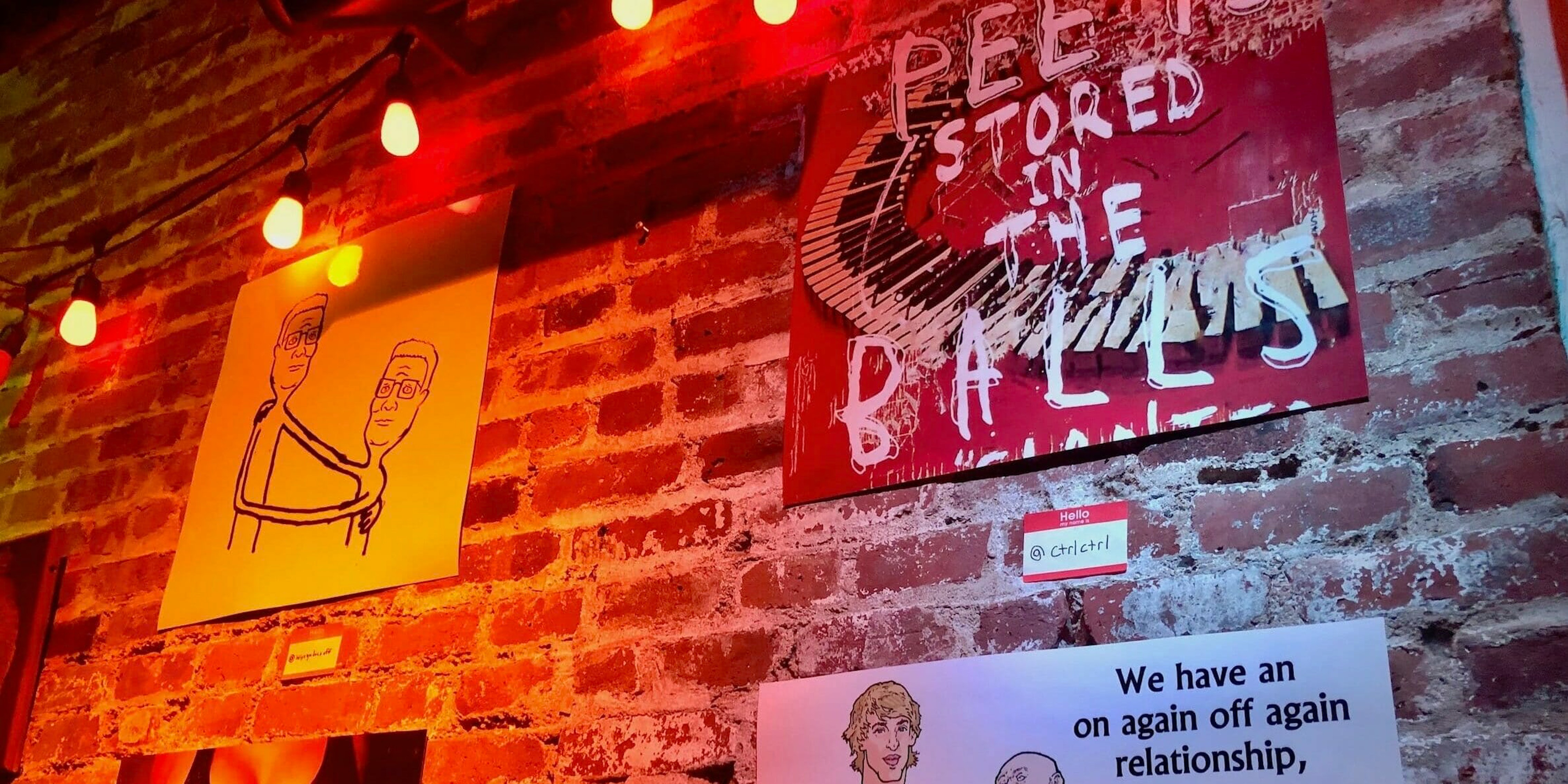 'Blocked and Reported' brings the Instagram meme community together.

The art on the walls incorporated images of popular cartoon characters, including Donald Duck, Garfield, and Arthur. But the pieces were not designed for kids; they were made for people who are Extremely Online. “Spank me daddy,” the Donald Duck print read. “I’ve been problematic.”

The print, which sold for $50, was part of a meme exhibition held at The Woods, a bar in Brooklyn’s Williamsburg neighborhood, on Thursday night. The event featured the work of 20 Instagram meme accounts and included projections and videos of memes. Meme-themed cocktails—including Dumb Bitch Juice and Grape Surgery—were available, as well as merchandise from a few of the accounts. A photo backdrop featured an empty sidewalk with grass on both sides and allowed attendees to create their own “you know I had to do it to em” meme.

It was the second “Blocked and Reported” meme show run by Jeff Fleisher, who works at the bar and goes by @ctrlctrl to his 31,000 followers on Instagram. Last year’s event was also held at The Woods but only showed memes via a projection screen. For his second meme party, Fleisher created a mini art gallery that featured print-outs of memes with labels showing each artist’s Instagram handle.

“I tried to feature a variety of different people with different styles to show that we all exist in the same world,” Fleisher told the Daily Dot.

One of those people was Cindie, who runs the Instagram account @males_are_cancelled and boasts 44,000 followers. Cindie, who uses they/them pronouns, makes memes about feminism, sexuality, and dating, among other topics. “I love having a voice online where I can be myself and be silly and have fun,” they said. “On top of that, I definitely see memes as an art form and I love how much subtlety there is to engage with, in both language and graphic design.”

Cindie sold T-shirts and stickers at the event that featured their work. A print of a meme taken from @males_are_cancelled read: “fuck rich people unless they spend all there money on edgy designer clothes because then they are taste makers and artists.”

Jacob, who runs @wipeyadocsoff with 33,000 followers, said the niche meme community on Instagram is “only getting weirder every year (in the best way).”

“I’ve always loved Photoshopping jokes in text conversations with my friends, and it’s cool ‪to have a place to put all those fleeting thoughts that make me laugh,” Jacob said.

If you follow these accounts, you probably noticed something that most of them have in common: They are private profiles, accessible only by requesting a follow. That means that posts from the accounts don’t appear on Instagram’s Explore page, and are not held up to the same scrutiny as public meme accounts on the platform. Although the accounts require users to opt-in, it doesn’t mean that the memes themselves are inaccessible.

Fleisher said that in fact, memes are becoming increasingly more accessible. “It’s definitely seeping into advertising and television, which hopefully will end up being a good thing for content creators to be able to get paid work doing what they love,” he said.

But as more people—and companies—discover memes as an art form and a communication tool, Cindie said that it’s important to remember the women, trans, and non-binary people of color who launched the meme community on Instagram.

“It’s really easy for corporations, for example, to run memes as ads, capitalizing on the super-accessible, relatable, viral-potential aspect while leaving behind the social movements and resistance that the format was born from,” they said. “Having meme shows like Blocked and Reported is a way to recognize creators and innovators of digital media who deserve larger platforms and heightened voices.”

The second Blocked and Reported appeared to be a success. Besides connecting and supporting the Instagram meme community, the event also sold a few meme lovers one-of-a-kind prints to hang in their homes.

Michael Nusbaum, a 29-year-old filmmaker, purchased two meme prints—one from @teenagestepdad and the other from @renaissance__man. He said they were “impulse” buys.

“I thought buying the prints would be a cool way to show appreciation for these artists who enrich my life with their free content, and I also felt like this was a really unique opportunity to have a physical copy of something that otherwise just lives on Instagram,” he said. “And I just generally love weird shit.”