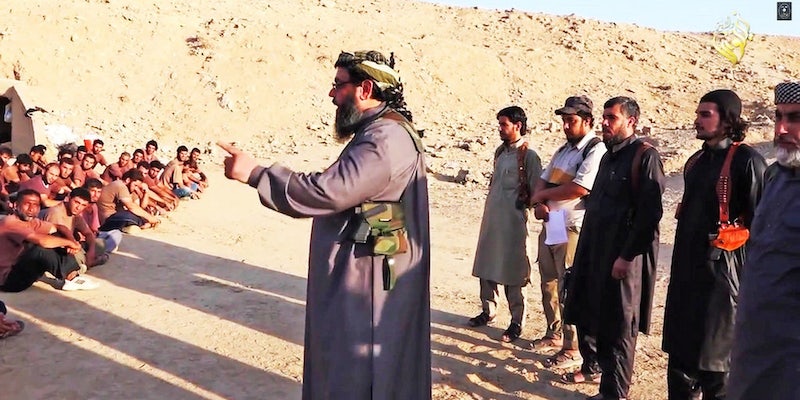 Breaking statues is an assault on the core of civilization.

The Islamic State’s swath of destruction across the Middle East has taken a disturbing turn. At the end of February, a video surfaced showing militants taking sledgehammers and drills to ancient statues and other artifacts at the Mosul Museum in Iraq. According to the International Business Times, the statues destroyed by militants in the tape date back to the Assyrian Empire, which spread across the region between 2500 BC to 605 BC. Their reason for the wanton destruction? The relics, some of which were nearly 3000 years old, represented idolatry against the Prophet Muhammad.

This isn’t the first time the Islamic State has waged a jihad against Iraqi iconoclasm: Al-Shorfa reports that since taking Mosul in July of 2014, ISIS has destroyed at least 28 historical religious buildings across the city, on top of dozens of others across Iraq and Syria since the group began its bloody rampage in 2014. The outcry from archaeologists and other cultural leaders has been fierce. Secretary of State John Kerry has condemned the “purposeful ideological destruction” that had “destroyed irreplaceable evidence of ancient life and society” across Iraq and Syria. Thomas Campbell, the director of the Metropolitan Museum of Art, decried the destruction as “a tragic assault not only on the Mosul Museum, but on our universal commitment to use art to unite people and promote human understanding.”

It’s UNESCO, the UN’s cultural heritage arm, that’s delivered the most forceful and powerful denunciation, declaring the deliberate destruction of Iraq’s cultural heritage as a “war crime” under Section 8 of the Rome Statute of the International Criminal Court. UNESCO chief Irina Bokova dubbed the vandalism and destruction of ISIS militants the equivalent of “cultural cleansing” in a statement. “This tragedy is far from just a cultural issue: it’s an issue of major security,” she said. “We see clearly how terrorists use the destruction of heritage in their strategy to destabilize and manipulate populations so that they can assure their own domination.”

She was right to do so: ISIS’s campaign against Iraq’s cultural heritage isn’t just a violation of international law, but a genocidal assault on the core of a civilization. Not only is there a legal precedent for calling ISIS’s destruction a war crime, but also a historical one paved by virtually every genocide of the 20th century.

The Wall Street Journal’s Eric Gibson points out that a “war crimes” declaration has legal precedent. During World War II, Hitler had thousands of works of art and personal cultural artifacts appropriated and even destroyed through the organized looting of Jewish communities under the Final Solution.

ISIS’s campaign against Iraq’s cultural heritage isn’t just a violation of international law, but a genocidal assault on the core of a civilization.

After the war came to a close, the UN adopted the Hague Convention of 1954, which requires signatories to protect “cultural property”—movable or immovable property of great importance to the cultural heritage of every people—from destruction and misappropriation even in times of armed conflict. And Article 8(b)(ix) of the Rome Statute, which falls under the category of “war crimes,” finds a “serious violation” if the “perpetrator intentionally directs attacks against buildings dedicated to religion, education, art, science or charitable purposes, historic monuments, hospitals and places where the sick and wounded are collected, provided they are not military objectives.” UNESCO Director Bokova’s words aren’t simply an expression of anger; they have the force of UN doctrine behind them.

Such a legal classification may leave some scratching their heads: Compared to ISIS’s other videotaped atrocities—the brutal decapitation of journalists and aid workers, the systematic execution of civilians, the use of children in warfare, and the extermination of ethnic minorities—destroying a few ancient statues seems like small potatoes, a crime, though heinous, that doesn’t rise to the level of “war crime.” How can knocking over a few dusty old relics rise to, say, the unsurpassable level of evil that was Auschwitz?

I don’t believe that anyone would weigh the value of a 3,000 statues against human life, but history shows that crimes against culture are inseparable from crimes against persons and communities. The extermination of 1.5 million men, women and children during the Armenian Genocide was accompanied by the destruction of Armenian churches and monuments, museums and libraries. According to historian Robert Bevan, there were 2,549 religious sites under the control of Istanbul’s Armenian Patriarchate, including more than 200 monasteries and 1,600 churches. Their destruction helped reduce a millennia-old culture and its ecclesiastical traditions to a shadow of its former self.

Historians and researchers have documented how the Khmer Rouge regime destroyed temples, forbade traditional celebration, and left “no space for cultural expression beyond propaganda for the regime” during the Cambodian genocide of the 1970s.

During the Bosnian genocide of the early 1990s, Serbian forces attempted to eradicate all traces of Muslim culture from occupied regions by destroying libraries, mosques and other significant cultural sites.

Rafael Lemkin, the Polish-Jewish lawyer who originated the term genocide in his attempt to effective describe the previously unseen crimes of the Third Reich, called the horrors of World War II “the destruction of whole populations—of national, racial and religious groups—both biologically and culturally.” It’s this definition that identifies the totalitarian nature of genocide, the sort of biological and institutional totalitarianism that came to define states like Nazi Germany.

UNESCO chief Bokova’s statement about using cultural terrorism as a tactic to subjugate resonates with every bloody conflict of the modern era: To control people, you have to control culture, the context on which civil society is built. It’s not enough simply to slaughter every Jew, Armenian, Bosnian Muslim, or Yazidi in a geographical area. True domination comes from the complete and utter control and destruction every aspect of a population, including culture and historical memory. Wiping it off the face of the Earth is only part of the equation: While enclaves of a civilization may survive elsewhere as refugees, the destruction of cultural sites introduces degradation and instability into a culture, reducing it to the level of oral tradition.

To control people, you have to control culture, the context on which civil society is built.

While human rights lawyers can debate the legal nuances of the Rome Statute, crimes that rise to that horizon of “crimes against humanity” will always require that we consider them against culture. After all, the Rome Statute doesn’t just define the jurisdiction of the ICC and how the institutions of international justice can prosecute individuals. It reflects and codifies the normative definition of crimes against civilized society, including genocide and “crimes against humanity.” The inclusion of cultural objects in the ICC’s doctrine on war crimes recognizes the all-encompassing nature of humanity’s evilest manifestations.

ISIS, often derided as a “vicious death cult” in its tactics and intention, is more like a burgeoning authoritarian state with a carefully considered ideology of cultural and religious purity. Not only is the militant group a portrait of brutality, but its implementation of Sharia Law and destruction of cultural artifacts suggests an organization on par with totalitarian states that seek to subjugate its citizens and strip them of all cultural and social individuality. Not only does this fall under the legal definition of a war crime, but it fits the profile defined by genocidal organizations before it.

Make no mistake: ISIS’s campaign of destruction of rises far beyond the level of vandalism. It is cultural terrorism, pure and simple.