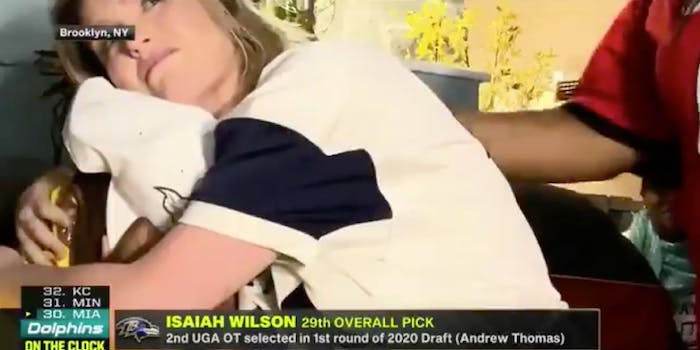 People are stanning his mom.

The unusual set up made the event all the more entertaining as viewers got to see everyone’s uncut reactions. Among the night’s breakout stars was Isaiah Wilson’s mom.

Wilson, the 29th overall pick and a Brooklyn native, was selected to join the Tennessee Titans after three years of playing for the University of Georgia.

When he gets the news, Wilson seems to be overcome with emotion and covers his face with his hat. A girl who may be his girlfriend (and whose face was out of frame moments before) slowly leans down to hug him, simultaneously inching her face into the shot.

Within seconds a woman, who appears to be his mom, pats the girl’s pat to signal her to get off Wilson. The girl tries to hold steady but Wilson’s mom swiftly moves her up and off her son—a move Twitter was very here for.

“Nah. Isaiah Wilson mom was right, white girl was on screen more than he was. MOVE,” Twitter user @BigHomieKODAQ wrote.

Some people are wondering what was said during the back and forth between the women.

Twitter user @BootlegFantasy had one guess as to what was said.

“Not sure who removed Isaiah Wilson’s girl here, but they said ‘nah get off the screen’ lmao,” @BootlegFantasy tweeted.

One Twitter user had some perspective for Wilson’s friend.

“I know u think ur gonna be w/ him forever… But just in case you’re NOT, don’t be the girl that ruins his draft video forever bc 5 yrs from now every time he watches it, you’re in it&you don’t even talk anymore. I’m just saying, I get where Isaiah Wilson’s mom was coming from,” they wrote.

The football star has yet to post anything about the incident, showing nothing but love on his post-draft feed with congratulatory messages to fellow draftees and gratitude to the Titans.