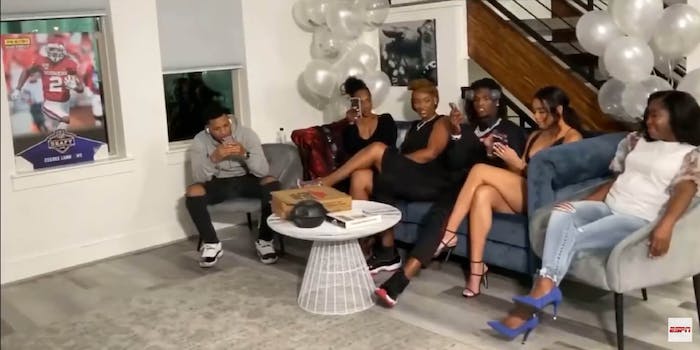 In the video, Lamb snatches his phone back from his girlfriend. It's apparently not what it seems.

CeeDee Lamb was drafted to play for the Dallas Cowboys, but that wasn’t what got people talking about him earlier this week.

After he was selected 17th overall, ESPN’s cameras showed him sitting at home with his family and girlfriend, Crymson Rose. As Lamb talked on one phone, Rose grabbed another sitting in his lap only to have her beau quickly snatch it back and shake his head.

“Bruh said ‘nahhhh what you doin,’” Young wrote, alongside a retweet of the video. (In the replies, someone noted that Young previously dated Rose, explaining why he found the clip so funny.)

But after the video of the couple took off, both Lamb and Rose have sought to defend themselves against the haters.

No, Rose wasn’t snooping; and no, Lamb wasn’t cheating.

On Twitter, Rose said that Lamb’s agent was calling him on the phone she attempted to grab.

“His agent was FACETIMING him while he was on the phone with the Cowboys,” she said. “I was doing the GF thing gonna answer it for him sheesh.”

Lamb later backed up her story in his own tweet.

“Y’’all really gotta chill wasn’t even like dat,” he wrote with a thumbs down emoji.