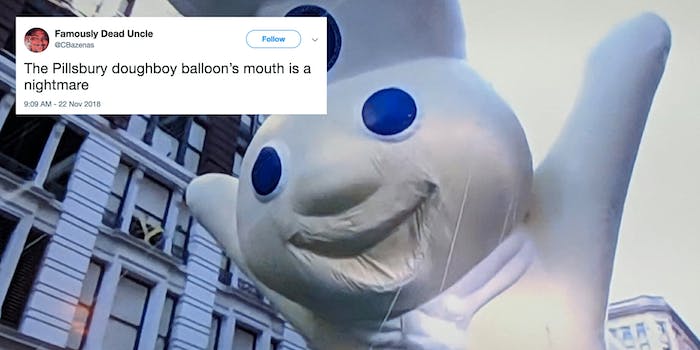 Is the Pillsbury Doughboy OK?

The giant balloon is looking a little worse for the wear.

No matter what shit goes down the other 364 days of the year, or what happens when your whole family is gathered around the turkey, there is one sure thing: the Macy’s Thanksgiving Day Parade in New York City.

A microcosm of Broadway musicals, high school marching bands, and oversized commercial balloons, the parade remains mostly the same year after year. But this Thanksgiving, some people noticed one guy looking a little worse for the wear, leading to the question: Is the Pillsbury Doughboy OK?

According to the Macy’s Thanksgiving Day Parade Wikia page, this is the Pillsbury Company’s second balloon. The first flew in the parade until 2013, and the one that went up Thursday has been in commission since 2014.

But as many on Twitter pointed out, the Doughboy—aka Poppin’ Fresh—isn’t looking so, well, fresh.

Did the @Pillsbury doughboy get a botched lip job for the @Macys #ThanksgivingDayParade this year? pic.twitter.com/T1M8WWre8h

The Pillsbury doughboy balloon’s mouth is a nightmare

"He needs botox now. Look at those wrinkles." – my mom when she saw the Pillsbury dough boy balloon. #MacysParade

Perhaps it’s because the Doughboy went through this trauma at last year’s parade, per Wikia: “In 2017, he kept swaying side to side dangerously and almost hit a tree and a building.”

Or maybe he’s just feeling how we’re all feeling after this year: Tired as hell but still going.

the pillsbury doughboy has seen some shit this year but he's still thriving and that, my friends, is the 2018 mood pic.twitter.com/U1vubehY3Y