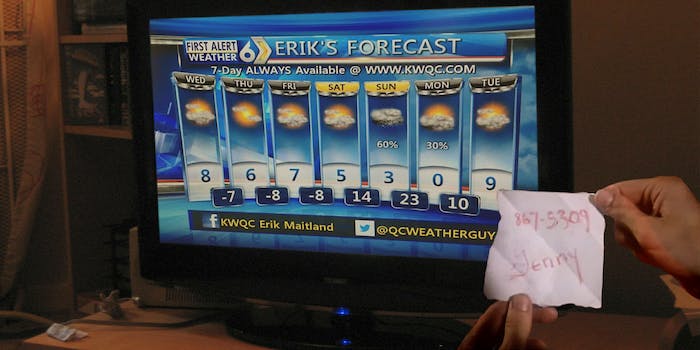 A weatherman's homage to his favorite 80's song caused a bit of confusion for some people.

In the early 1980s, Tommy Tutone’s hit song “867-5309/Jenny” caused no small number of headaches for people who actually had the phone number. The song reached the number four spot on the Billboard Hot 100 list, leading people to randomly dial up the number and ask for Jenny.

In 1982, Lorene Burns, (formerly of 205/867-5309), told the Lakeland Ledger they would get calls at two or three in the morning asking for Jenny. Her husband, who was hard of hearing, would think the caller was asking for their son and say “Jimmy doesn’t live here anymore.” Burns was none too happy with the band.

“I’d like to get hold of his neck and choke him,” she told the paper (Mrs. Burns made the common mistake of thinking Tommy Tutone was a person, and not the name of the band, although she probably would have happily choked all the members).

Almost 36 years later, the song is still causing confusion. This time the bewilderment occurred when Davenport, Iowa weatherman Eric Maitland posted the digits as the day’s highs, as a joke on Facebook.

Hoping that one day the extreme cold will let me plot my DREAM 7-Day forecast!!!

Despite Maitland writing “Hoping that one day the extreme cold will let me plot my DREAM 7-Day forecast!!!” and the fact that some of the low temperatures are higher than high temperatures, some people still believed the forecast was real.

This was especially true after people started posting the image to Twitter without the original explanation.

The average low in Davenport during January is thirteen degrees but, even if you assume it’s going to be a single digit number every day, the odds of it coming out to those particular numbers is 1 in 10,000,000, which are about the same as the odds of you getting that song out of your head at any point today.