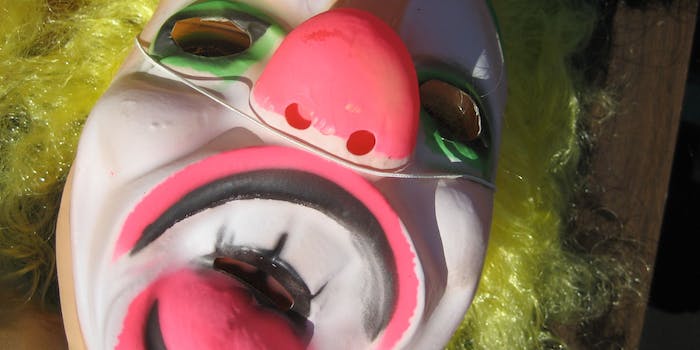 Just hope you never see them all get out of one car.

It really is incredible what an old, semi-acclaimed Stephen King character can do. It is maybe the seventh or eighth title in the canon, but Pennywise the Dancing Clown has become remarkably indelible: an unsettling, white-faced, red-nosed clown with deeply upsetting teeth.

In 2016 there have been hundreds of sightings of phantasmagoric clowns gunning for the exact same nerves that Tim Curry so beautifully exposed back in 1990. Yeah, obviously the epidemic is mostly engineered by idiot kids shooting for some brief virality, but it’s still pretty interesting.

So much so, that we at the Daily Dot have taken it upon ourselves to highlight some other clowns of less auspicious origins that have been haunting our dreams for a long time.

All right, so you can’t really write a story about creepy clowns without mentioning serial killer John Wayne Gacy. Did Gacy actually commit any of his 30-odd murders dressed as a clown? Well, no, probably not, but he did regularly work children’s parties all painted up. Whether or not he intentionally tried to look creepy, or if it’s projected from our knowledge of his crimes, is hard to say.

Doink the Clown was an actual character in early ’90s WWF. As you might expect, he portrayed a prankster clown who would routinely run afoul of other, unamused pro wrestlers. In a weird way, I think Doink was kind of ahead of his time. I mean, I don’t think we truly started internalizing our fear of sadistic clowns until, like, Seth MacFarlane started drawing them in the Hot Topic era. That counts for something!

Eric Davis is a performer who’s done work in prestige productions like Cirque du Soleil. But he also has a one-man show where he takes on a twisted, grotesque clown persona called Red Bastard. It’s more entertaining than you might think!

Straight up, Sideshow Bob is probably the scariest clown on this list, and yeah, that has a fair amount to do with Kelsey Grammer.

Shawn Crahan has built an entire career out of dressing up like a gross clown and playing guitar in Slipknot. Literally anything is possible if you put your mind to it.

The Bicycle Doctor is that clown that shows up in Pee Wee’s Big Adventure. He is also the core, fundamental source of all the anxiety that has followed you in life.

I mentioned Seth MacFarlane above, and I really do think our modern depiction of an evil clown starts with Spawn. Yes, Spawn has aged about as poorly as any cultural artifact has ever aged, but I have to give it up to the character’s primary villain. Violator is the platonically ideal of an ugly, horrific, unhealthy-looking clown, and years later, we are still feeling his influence.