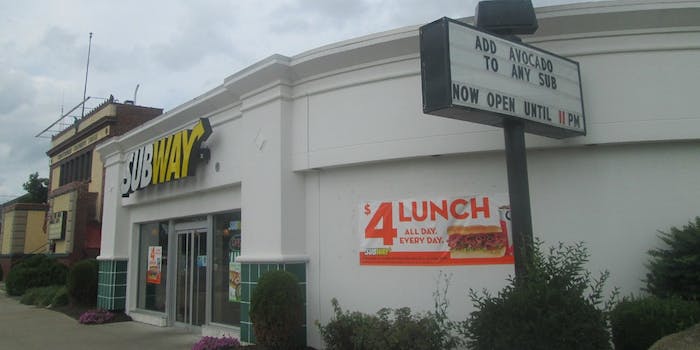 A gem among critics.

She made her name (and her Internet fame) with a sparkling review of the local Olive Garden in 2012, and she made a successful return to the national spotlight in 2014 with a pleasing write-up of the Ruby Tuesday in Grand Forks, North Dakota.

Now, America’s favorite food critic is back for another round, and this time, Marilyn Hagerty has her sights set on Subway.

In Tuesday’s edition of the Grand Forks Herald, Hagerty writes about her trip to a local Subway restaurant and describes it as though you’ve never been there before. Writes Hagerty:

Sandwiches were constructed to suit our tastes at the shop on 1850 Columbia Road, where there are 20 employees. The manager, Andrew Goren, says the place is busy between 7 a.m. and midnight. The sandwiches are made up according to the customer’s preference of an array of condiments.

While Subway shops are waiting with ham, chicken and beef, Goren says turkey is the No. 1 choice. And there’s a six-inch turkey version that goes for $4.50. Drinks are extra. So are the cookies.

And as the weather grows colder, more customers look to Subway for chili, broccoli cheese or a creamy potato soup.

Props to Hagerty for interviewing the manager. That’s not what one usually sees when reading a restaurant review! You also rarely read about how the drinks cost extra money—I thought that’d be implied.

I also enjoyed this tiny shot at Subway’s clientele:

Like the many national food chains, Subway is bulwarked online by all the information you could possibly want. There are serving sizes, calorie counts and cholesterol reports readily available. They mean little to most who stand through the lines at a Subway. They are important to others who have health concerns.

Ouch. Don’t think I won’t remember that the next time I’m standing in line, ready to order my foot-long cold cut combo with a gallon of mayo and extra cheese.

Perhaps because this is a local paper, Hagerty also gives us a history lesson on who brought the Subways into town a quarter-century ago, where the first local franchise was located, and what happened to the former owners in the 26 years since (if you’re interested, Debbie and Brian Conneran no longer operate the Grand Forks Subways, but they have interests in a local Little Caesers and own three hotels in town).

My only criticism of the review is that this isn’t actually a review. It’s more of an overview of one of the most well-known fast food chains in the world. At least with the Olive Garden and Ruby Tuesday reviews, we actually got to learn what Hagerty enjoyed about her experiences.

Either way, Hagerty is a marvelous guide to culinary delights, and as long as she keeps writing—no matter what she writes—I’ll be reading. Because, as she pens, in her lede, “New York this isn’t.”

Right, and I could read about New York’s dining options just about any place on the Internet. But I want to know about Grand Forks’ chains, and Hagerty fills up the stomach in my brain like no other.