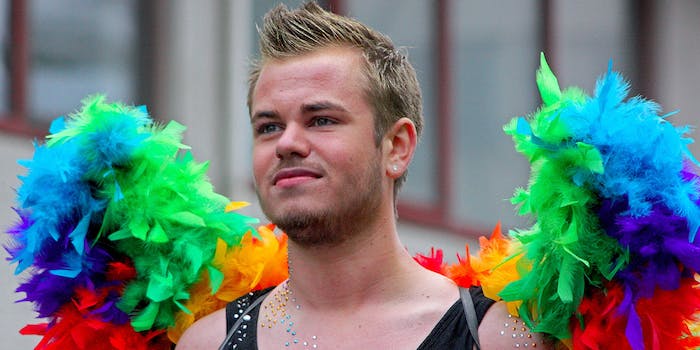 Why you should actually celebrate International Men’s Day

The holiday is an opportunity to recognize that the gender identity of 'man' suffers from limitations.

Across social media Thursday, people across the globe “celebrated” International Men’s Day primarily by mocking the entire concept. At first blush, that mockery seems justified. Do men, as a gender, really need another platform? But look a little deeper and you’ll see there’s a lot the idea legitimately worth lauding.

Dr. Adam Olis and Professor Thomas Oaster, director of the Missouri Center for Men’s Studies at the University of Missouri, created the holiday in 1992 as a way to spotlight men’s issues. The idea’s groundwork has its roots in the gender-specific holidays of the Soviet Union. The initial thrust of the movement focused on celebrating positive role models for young men who did not benefit from supportive holidays like Father’s Day. Today, the movement has expanded its focal points to include improving men and boys’ health, promoting gender equality, and bettering gender relations.

Despite those seemingly good intentions, the very idea of men getting yet another platform, arguably at women’s expense, tends to elicit more than a few groans. International Men’s Day has come and gone for 2015, but not without the sardonic commentary of many feminists.

International Men’s Day is an opportunity to recognize that the gender identity of “man” suffers from limitations of representation.

The default strategy of certain anti-patriarchal activism in recent years has been to construct a strawman of the desired proportions and beat life into it. It is a problematic approach. The result is the kind of confused vitriol demonstrated by BuzzFeed writer Scaachi Koul. Her suggestion for celebrating International Men’s Day? “Put your dick inside any new and fun holes you find.”

International Men’s Day is an opportunity to recognize that the gender identity of “man” suffers from limitations of representation. Ironically, Scaachi’s article highlights those very limitations. She springs immediately for the most beleaguered tropes of manliness, punctuates it with an eyeroll, and extends her jar to catch the male tears. More concerning is that her treatment conveys a complete disinterest in the gender reality of manhood beyond the most narrow portrayal of patriarchal behaviors. International Men’s Day is not about asking, “What about patriarchy?” It is asking, “Am I not a man?” This is not only a fair question, but a necessary one. There are multiple subgroups of men that are misrepresented and even trapped by the label “man”—most notably transgender men. By stepping under the umbrella of manhood, the issues of trans men are immediately shadowed by the stigma of patriarchy. While an identity is gained, a voice is also lost. It’s a much-needed voice, when we consider the violence and stigmatization to which the group consistently falls victim.

Nov. 20, the day following International Men’s Day, is Transgender Day of Remembrance, a day established to memorialize and commemorate the members of the transgender community who lost their lives to violence.

Much of that day’s focus is on the issues faced by trans women, and perhaps with good reason. The annual day of remembrance was established in recognition of the murder of Rita Hester, a trans woman and activist stabbed 20 times in her apartment by an unknown assailant who was never brought to justice.

International Men’s Day is not about asking, “What about patriarchy?” It is asking, “Am I not a man?”

At the same time, trans men face as harsh reality that is, in this case at least, overshadowed by feminism’s battle with patriarchy, as well as the staggeringly high murder rates of trans women. By writing off International Men’s Day as “any other day of the year,” as many were quick to do, we are failing to give space to the trans men of society who are seldom given a platform and are far too frequently marginalized even within the LGBTQI community.

Of course, many understood that, hence the birth of an #InternationalMensDay Twitter conversation, which poignantly delved into the meaning of “man” itself.

Happy #InternationalMensDay to all the men of color, trans men, gay men, disabled men, and all those who have been so strong. ❤️

These reactions from women pushed back against sexism and inequality by broadening the definition of “man,” instead of merely propping up archaic models of manhood and using that as a proxy for an all-out dismissal the label. There is nothing inherently wrong with the international celebration of men. The problem lies in the conflation of the word “man” with the outdated idea that it only represents cis men. It does not, and our intersectional social movements most certainly should award it no space to.

In addition to the scope of its objectives, International Men’s Day will require new dialogue about the terminology it employs and who it has come to represent. International Men’s Day represented victims of assault, victims of rape, disabled men, transgender men, men with eating and body image disorders—the men often marginalized and left unheard. It raised awareness of the high suicide rates among men, mental health issues, and the lack of support for male victims of domestic abuse.

Next year, there is hope that International Men’s Day will be met with even more support from women who value the very men society has written out of manhood.