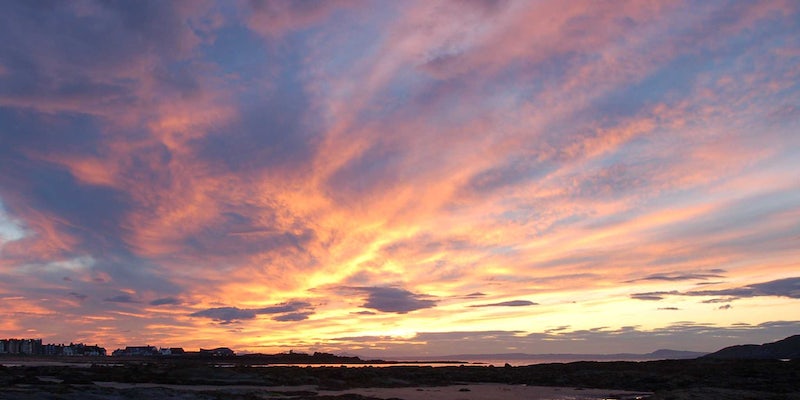 In the world of traditional arts, it’s those who aren’t doing what everyone else is doing that receive the highest praise. Online, that's not the case.

On particularly pink-skied days in any given city, when the clouds are just right—perhaps low and somber, the sun teasing out from behind them—hundreds of thousands of photos of that same sunset might suddenly appear. They skip across Instagram like little warm pebbles, followed by a rainshower of little hearts clicked excitedly on commutes and couches all across America. Look out your window, Chicago; look up in the sky, Terre Haute, the multiple photographs of the same setting sun seem to say.

A million photographs, all the same, in tiny thumbnail form. Each with 20 or 100 or 500 likes. It sometimes feels like Instagram is just market research for how much people love sunsets. But what is unique about any of these photos, really? Confess: Are you, like me, just a little bit tired of those ubiquitous shots?

In a world where everything is siphoned through the same 19 filters, it is becoming increasingly difficult to distinguish ourselves, our own personal aesthetic and vision, from everyone else’s.

Of course, this isn’t a dilemma that’s new to the world because of the Internet; for years artists have been forced to overcome the restrictions of whatever media was technically viable at the time. But it certainly is magnified by it. How many times have you opened your Instagram feed only to see what seems like the same four pictures of cats on sofas scroll by? A College Humor video spoofed the “sameness” nature of Instagram with “Look at this Instagram,” where the lyrics mock the repetitiveness of Instagram feeds:

Every time I take a photo of an old door
Every sign out in front of an abandoned store
It’s such a thrill to add a filter
Lo-fi, Lo-fi

It is because of these filters that 20 different photographs taken by 20 different people of 20 different subjects can still somehow have the same red tint, the same contrast to the edges. Cameras on phones get better every day, more complex and more sensitive—but we’re all essentially taking pictures of the same things, in the same colors, whether we intend to or not.

In his book on the topic of photography, The Ongoing Moment, Geoff Dyer writes,

Can this be true of the rest of us? Instagram seems to think so. We’re constantly influenced by the world around us, the language of others, their various aesthetics. It makes sense that those we find ourselves attracted to and end up following are also the ones we’d end up emulating, intentionally or otherwise.

But where is the individual voice among so much conformity?

And does it matter?

I no longer think that an individual voice is the goal on the Internet. We’re bowing to peer pressure, no longer trying to distinguish ourselves at all but instead starting to blend in.

The comparison I use most often (probably because it’s most familiar to me) is the emergence of grunge music. Nirvana exploded; then there were all of these other bands who sounded just similar enough for record labels to market under the “grunge” label, and then very quickly everything had the same distorted guitars and growling lead singer, and Seventeen Magazine was suddenly advising us not to wash our hair for a week.

While it may feel slightly odd to compare Instagram to grunge music, in a similar way, there are the Nirvanas that are the real photographers, then, with the aid of a filter called Earlybird, there are the Matchbox Twentys that are the rest of us. We all wish we sounded like Nirvana. And that’s the promise of Instagram: We all can sound like Nirvana with the right filter. Or, to use a better suited genre, all of our photographs can look like William Eggleston, or Dorthea Lange, or whichever other photographer we’re attempting to (as Dyer put it) metamorphose into.

Of course some people do still stand out from the crowd. I have a friend who refuses to use Instagram’s filters; every photograph he takes is therefore that much more his own. Others buck the trend with apps that allow them to frame their rectangular shots within Instagram’s square crop. Certainly Monet didn’t suffer from being bound by the medium of oil and canvas—why should any other artist be bound by whatever app he or she happens to be working with?

There will always be real talents in any medium, and there will always be outliers who don’t follow the crowd. There are people who are still working hard to distinguish themselves as voices, and mostly these are the voices that are just looking at Instagram as media, and their art lives beyond the medium.