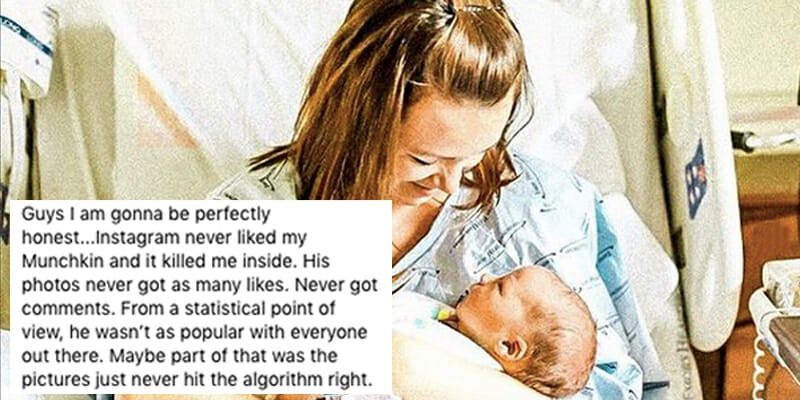 Well, this poor kid is doomed.

There’s a reason why Black Mirror scares us so much. The dystopian series puts the effects technological advancements have on modern society under a microscope, often revealing the worst in human nature.

In what could be literally a page from the series, a mommy blogger and Instagram “influencer” has gone viral for an extremely thinking-face emoji post to wish her six-year-old son a happy birthday. After expressing the usual sentiments one does when celebrating the birthday of a child, 35-year-old mother of five Katie Bower took a hard left turn—as captured in a screenshot by BuzzFeed’s Stephanie McNeal ‏on Twitter.

The particularly questionable part of the since-deleted post reads as follows:

Guys I am gonna be perfectly honest…Instagram never liked my Munchkin and it killed me inside. His photos never got as many likes. Never got comments. From a statistical point of view, he wasn’t as popular with everyone out there. Maybe part of that was the pictures just never hit the algorithm right. Part might be because he was “the baby” for a very short amount of time before LJ came along…and then Max and then Ella. And people like babies. I say all that because I want to believe that it wasn’t him…that it was on me. My insufficiency caused this statistical deficit because obviously my Munch should get ALL the love and squinty eyes are totally adorable. so can we do this right? Because I truly KNOW that my Munch deserves alllllll the likes…whether or not a stranger gives it to them.

In a postscript, Bower adds that she wanted to clarify her remarks because she knows one day her son will “see the numbers” and have to learn the difficult lesson “that his value is not in online approval.”

As McNeal’s tweet, and Bower’s post by proxy, began to go viral, others jumped into the fray to express their bewilderment that she felt the need to unburden her soul with this on her son’s birthday.

jfc this is terrible

If Bower’s name sounds familiar, earlier this year she went viral for an equally unflattering reason. In a post memorializing 9-11, Bower—who was in college at the time of the attacks—admitted to not realizing the extent of how many people died until a year after the fact.

“I was a stupid airhead at the time that didn’t realize that people were actually in the buildings,” she wrote on September 12, a day after the anniversary. When called out, Bower defended herself by saying that she only had dial-up internet and no TV when the attacks occurred, that “nobody told her about it,” and that she “didn’t even know what to ask” about literally one of the largest coordinated attacks on American soil.

“Some things are best left unsaid,” commented one person at the time, a lesson Bower still could apparently stand to learn from.