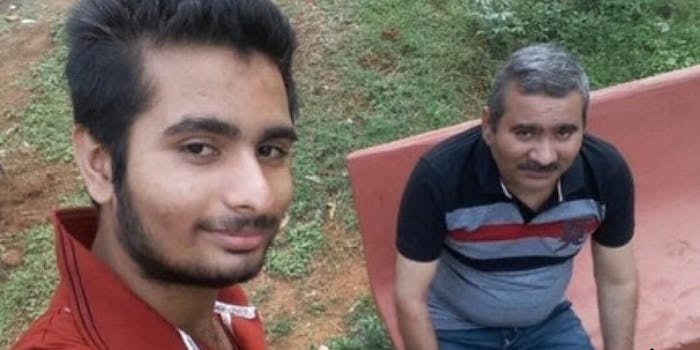 This meme is cruel, racist joke on Indian man and his dad

It offers narrow and harmful ideas, with reportedly real consequences.

Reddit’s IndianPeopleFacebook subreddit is devoted to “screenshots of Indian people being hilarious on social media,” which mostly boils down to mocking broken English or making fun of the stereotype of the lecherous Indian guy who tells women online to “show bobs and vagene.” Even at its best, the subreddit is putting forth racist and harmful ideas about Indian culture. At its worst, it’s making fun of a man and his disabled dad.

A meme called “Durgesh” was recently banned from the subreddit after it came to light that it had reportedly hurt the real people pictured. In the story of the meme, a young man called Sanjay kept trying to meet girls (sometimes underage girls) online, but whenever he showed up in person, he’d find that “54-year-old Durgesh” had catfished him. The wily Durgesh became a running joke on the subreddit, but his backstory was totally made up.

In real life, young “Sanjay” is reportedly named Durgesh. The man described as “54-year-old Durgesh” is his father, who is reportedly disabled.

The moderators of the subreddit found out the truth after a friend of “Sanjay” made a Facebook post explaining how the meme had hurt his family. They decided to put a stop to it.

“Okay fellas so I don’t usually share off-topic posts but just sharing this because pages, including the otherwise good philosophy pages I follow, have shared this meme. For people who don’t understand Hindi, the gist of it is that Durgesh is the guy in the meme (who’s being referred to as Sanjay), and the other one is Durgesh’s dad, who is disabled. The photos were stolen without their consent and it’s taking a toll on them,” wrote moderator atticus94 on Sunday.

Word has also spread on Twitter that the meme is a cruel prank. This tweet by @afghangster has been shared thousands of times already:

The situation is especially dark because the photos were apparently stolen to troll the real Durgesh, and the IndianPeopleFacebook community unwittingly helped his harassers by turning them into a meme.

The Facebook post is mostly in Hindi, but the English passages make it clear enough what’s reportedly going on: An “enemy” used Dargesh’s image for a parody Instagram account called “Sanjay Kapoor.” “It went viral in minutes,” the poster explained.

The smear was especially hard on Durgesh’s “physically disabled 50 yr father,” the post continued: “no one knows what things he has gone through. 2 brain surgeries,,, his body is too weak for all this bullshit,,, … Durgesh is his only child,,, just think of it ,,,”

On IndianPeopleFacebook, though, not everyone is sympathetic. Instead, some are concerned with defending their right to joke.

“Why does it matter if he is disabled? Nobody is making fun of him or his appearance. He just isn’t a 13 year old girl,” one poster wrote.

“Yeah he doesn’t appear disabled in any of the photos nor is the meme making fun of him for being disabled or his appearance,” another added.

The most extreme comments attack the moderators for alleged censorship and equate them to Nazis for putting a damper on the meme. “Is this for real?” one poster writes. “Are there any memes on this sub you wouldn’t say are toxic? Who the hell let you decide where to draw the line? Can’t believe this place is run by meme nazis apparently. implying the pictured dude can’t handle being in a meme is toxic, your negativity is toxic- in fact far more toxic than those humorous Instagram posts fake or not.

“If you don’t like memes that make fun of Indian dudes maybe you should seriously consider stepping down as a mod of this sub seeing as that’s pretty much what this sub is entirely about.”

What neither the moderators nor their critics seem to have considered is that perhaps there shouldn’t be a subreddit dedicated to “memes that make fun of Indian dudes.”

The only difference between “Sanjay” and all the other men mocked by Indian memes is that “Sanjay” reportedly found out about it and pushed back.