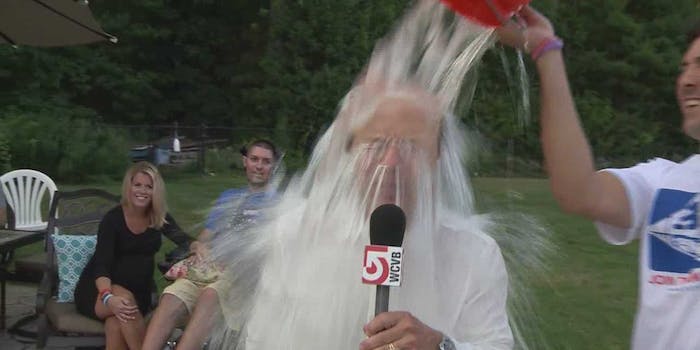 In defense of the silly, shallow ALS ice bucket challenge

Capitalizing on Internet narcissism might be the best thing that ever happened to non-profit fundraising.

It’s so easy to find things to be cynical about on the Internet that the ALS ice bucket challenge comes as almost a dare to those of us who rolled our eyes at Taylor Swift gifting a randomly chosen, lucky fan with $90 to spend at Chipotle—right before she just so happened to have a new album coming out.

The ALS ice bucket challenge, designed to raise awareness (and funds) for those suffering from the neurodegenerative ailment also known as Lou Gehrig’s Disease, has been dominated by celebrity PR stunts (of which Ms. Swift also took part) and Facebook one-upmanship. It started out on the golf circuit and quickly went viral—with challenge participants nominating people they want to see partake. As it grew, the challenge became less about spreading knowledge about the disease on social media than to provide a trending post for your followers, to boost likes and your own Internet profile, but as the evidence shows, narcissism might have its benefits.

It’s telling of the trend’s penchant for self-aggrandizement that yesterday a friend pointed me to a photo he joked was Vin Diesel’s own entry in the challenge, a nude photo of the buff actor showering that Diesel posted to his Facebook page, and—for a moment—I actually believed the lie.

In fact, the ALS ice bucket challenge has so much to do with our own narcissism and so little to do with the actual fact of disease that I wonder if many of those posting to social media even know why they’re doing it—or what ALS even is. Lack of information on the challenge didn’t stop Daily Dot writer Beejoli Shah from joining in:

Despite not having a backstory on the trend, my ‘fear of missing out’ alarms started going off, and when a good friend referenced being tagged in the challenge, I instantly asked her to tag me too. I may not have remembered what ALS stood for at the time, but damn if the narcissist living inside of me didn’t want the chance to make a hilarious video as well.

This isn’t the first time that Internet charity memes have missed the point of the campaign’s original intention. In May, the Daily Dot’s Molly McHugh commented on the then-viral trend of #nomakeupselfies, in which a woman posts a photo of herself without even the slightest hint of blush in order to raise awareness for breast cancer.

As McHugh explains, the trend quickly devolved into humblebragging about how you #wokeuplikethis:

When Zooey Deschanel posted a makeup-free photo of herself to Instagram, it certainly wasn’t “brave,” as McHugh points out, but these Random Acts of Narcissism are good for something: raising funds. According to The Guardian, the #nomakeupselfies campaign raised over £2m for cancer research in the U.K.

Like those divisive pink ribbons worn for Breast Cancer Awareness, the #nomakeupselfies and ALS ice bucket challenge are activism as a fashion statement, but benevolent self-interest might be the best thing to happen to fundraising since the invention of PayPal. Thus far, the stupid ice bucket challenge has raised $15.6 million for ALS research, reminding us just how profitable narcissism is.

No one is debating that the ALS ice bucket challenge is silly, shallow, and a total waste of resources (imagine the millions around the world without access to clean water who would be furious to see it poured over Instagrammers’ heads), but appealing to what is silly and shallow (as well as very easy in terms of buy-in) has proved a whole lot more effective than a fundraising campaign in earnest.

ALS foundations have been campaigning for awareness for years, but what got people to start paying attention is when activism became “trendy,” yet another merchant of cool on the Internet. Everybody knows someone who has been involved with the ice bucket challenge, and whether you rolled your eyes or liked their Facebook post, you thought about ALS in a way that would make any non-profit drool.

Surely, the fundraisers are taking our selfishness to the bank, but the actual people living with ALS are no laughing matter; aside from the dollars and cents, the most positive outcome of the viral video trend on social media has been those affected by the disease sharing their stories—whether its their battle, or they have a friend or a loved one diagnosed.

You might know someone who poured a bucket of ice on their head for reasons they don’t understand, but you also know someone for whom ALS is a daily reality. This week, our silly, shallow Internet made their lives a little more visible.