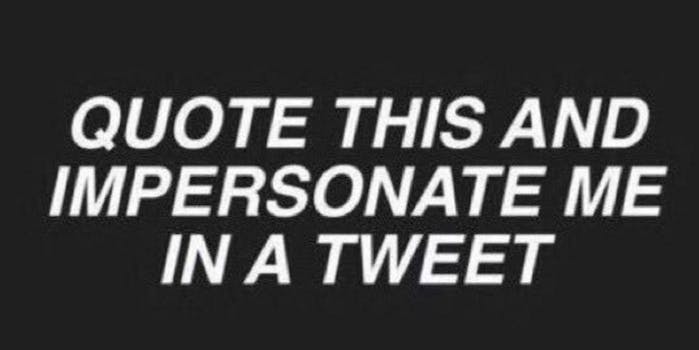 Impersonate your friends’ bad tweets with this hot new meme

You have to have thick skin for this one.

Another Twitter trend has taken off, and the rules are simple: “Quote This and Impersonate Me in a Tweet.”

Twitter is the number one social platform for people to speak their minds without much thought as to how it will affect someone else. What better place to mimic someone with brutal honesty?

why yes i love bleep bloop music someone should put a fat grumpy asian bb in a crop top also https://t.co/eqr76Zh0ZP

Users have mixed emotions about the trend. Some are loving it, while others are afraid to put their feelings on the line.

Too insecure for that "impersonate me" meme tbh

I can't wait til this "impersonate me" thing y'all clogging the feed with goes south and the teeth come out.

Y'all are brave with that "impersonate me in a tweet" business. No, thank you! LOL!

if anyone dares impersonate me in a tweet, i'll sue

i've been impersonating myself in tweets for years now

Do you see yourself joining in?

I'll never challenge someone to impersonate me as I have very low self-esteem already. pic.twitter.com/1SlFv5q1q6