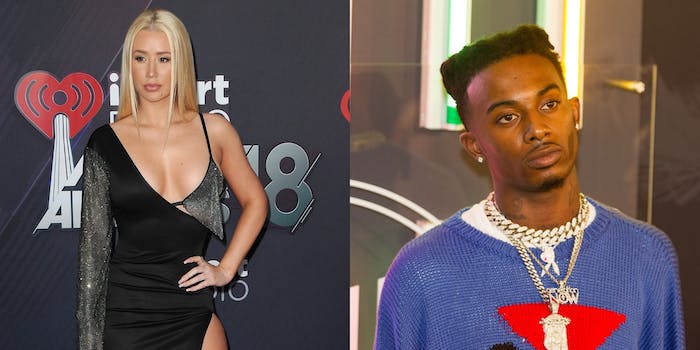 'Too bad you got an album out but can’t even come to Christmas with your own son.'

Azalea, who catapulted to stardom in 2014 with her chart-topping hit “Fancy,” dragged Carti on Twitter for allegedly ignoring their son on Christmas to instead promote his new album.

“Too bad you got an album out but can’t even come to Christmas with your own son,” Azalea tweeted.

The 30-year-old rapper also aired her baby daddy’s indiscretions for her 7.7 million followers to see.

“Imagine not flying out your family on Christmas but you have the girl you cheated on my my (sic) entire pregnancy at your album party and magically me and my son can’t come for Christmas any more? TRASH,” she wrote. “This man had a whole family vacation to planned 48hrs ago & I hope this message gets to you girl. Although you hid in a whole closet from my house keeper so it’s not like you have any dignity I guess.”

Azalea—who has frequently been criticized for her questionable skills on the mic and accused of appropriating Black culture—acknowledged that her tweetstorm would likely earn her no fans. She also previously bashed former fiancé Nick Young of cheating on her. But after seeing Carti ignore their son, she couldn’t keep quiet any longer.

“And I’ve not said anything (and could say much more) for the longest time because I know the net won’t side with me & that I’m hated. But Christmas?” she tweeted. “And this bitch ‘proud’ of you in her stories? Lmfaooo I’ve covered for so long hoping you’d do better. a lot of women relate.”

“To clarify this man was literally at my house last night telling me he loves me,” she added. “So this is very much NOT me being bitter, it’s me not ducking with trifling ass shit that happens at the expense of my son.”

As she predicted, Azalea’s tweets drew mixed reactions. Many women could relate to her and praised her for speaking up about Carti’s alleged behavior. Others accused her of trying to bring a Black man down on what was supposed to be a celebratory album release day.

“Iggy stop. Tryna bring a black man down on the only day he gets to shine this year. WLR,” one person tweeted at Azalea, to which another responded, “Has nothing to do with race. He’s behaving like a real deadbeat dad and deadbeats come in all shapes, sizes, and races.”

“Yall are mad at iggy for wanting her father to be in her child’s life … strange,” another Twitter user wrote.

Many of Azalea’s defenders presumed that her haters were straight men suffering from a mild-to-extreme case of misogyny and a compulsion to share their unprovoked opinions.

Others piggybacked off Azalea’s tweets as an excuse to further trash Carti’s Whole Lotta Red, which has earned … mixed early reviews.

“Just finished listening to WLR, currently lost for words man, crying real tears carti bro, this is quite possibly, quite literally, sincerely, the worst possible music I have ever heard,” one person wrote in Azalea’s mentions. “My ears are dripping with blood, currently on my way to the emergency room on Christmas Day.”

Carti has not publicly addressed Azalea’s tweets or responded to the Daily Dot’s request for comment.