It's a dangerous idea with no basis in reality. But is it possible?

It takes an impressive effort to instantly vault yourself into the upper echelon of internet hypotheticals. You know the ones: Would you rather fight 100 duck-sized horses or one horse-sized duck? If you had the opportunity to go back in time and kill baby Hitler, would you do it? Would you take $10 million, but for the rest of your life have a snail trying to murder you?

“Could Obama murder Trump & Pence, then pardon himself? Asking for humanity,” he wrote. 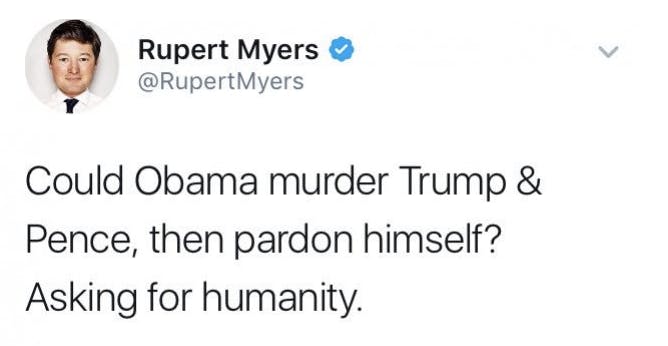 It’s a ludicrous proposition—a Quentin Tarantino revenge plot crossed with an Aaron Sorkin season finale cliffhanger—one that no one is sincerely advocating for. Not only is murder illegal in the U.S., but it’s grossly immoral. In fact, any threat to “take the life of, to kidnap, or to inflict bodily harm upon” the president of the Unites States is considered a class E felony.

Regardless, the scenario immediately picked up steam online, as anything with bombast about the incoming president typically does, and Myer was inundated with messages from people calling for his resignation from GQ and his death.

@RupertMyers hey cuck bait, I'm asking for humanity, can you kill yourself?

@RupertMyers HEY RUPERT YOUR NAME IS POPPING UP ALL OVER IN #pedogate #pizzagate WOULD YOU LIKE TO ADMIT SOMETHING B 4 U R 100% EXPOSED???

“It looks like a lot of Russians have been kept very busy,” Myers joked about his mentions over the past week.

Many people bashed him for even suggesting something of such nature. But pondering the possibility of something like that is not inherently bad, according to Alstair Norcross, a professor of philosophy at the University of Colorado.

“It’s not wrong to speculate [on things of that nature],” said Norcross, who specializes in applied ethics. “It would be one thing to [propose it] to someone likely to do it, but you should be able to discuss whatever the hell you want. There are signs the incoming administration is going to clamp down on freedom of speech and wants the press to be compliant, [so] I think we should speculate on anything we want to.”

Myers said he started thinking about the scenario after watching the president-elect’s news conference last week—which left many already frightened for Trump’s presidency in a further state of panic—while contemplating pardons issued by past administrations. There have been plenty of actions that raised eyebrows by outgoing presidents—most recently, with President Obama’s pardoning of Chelsea Manning—and the scenario isn’t even all that far-fetched in the grand scope of American history: Andrew Johnson pardoned two men convicted for Lincoln’s assassination, both of whom had directly aided John Wilkes Booth.

“It is a stunning power, not much like anything else,” said Harold Bruff a constitutional scholar and former dean of the University of Colorado Law School. “Most everything in our government is limited someway, but the law of pardon is plenary. It’s unrestricted. [It’s led to] some ugly ones in the past.”

Indeed, it was efforts to fight Johnson’s blanket pardon of Confederate soldiers that led to the precedent today that any pardon is essentially unchallengeable, noted Bruff.

So could Barack Obama really do the unthinkable?

“First off, Obama is already doing [things like] this,” said Thomas Pogge, the director of the Global Justice Program and a professor of philosophy at Yale University. He’s referring to what many consider to be one of the darker parts of Obama’s legacy, his policy of targeted drone killings throughout the Middle East. The justification by the Obama administration for the killing of Anwar Al-Awlaki, the most prominent American ever extrajudicially killed, was that he posed an “imminent threat” to the United States, Pogge notes.

“Of course, killing a politician is a  different thing,” Pogge clarified, noting that any president imposing his will on the voice of the American electorate in this way would be wrong.

But for the sake of argument, let’s just say Obama goes rogue. Could he get away with it?

Surprisingly, a presidential pardon isn’t all that professional. In fact, it’s somewhat astounding how little would be required for the president to conditionally absolve himself (at least until he was taken to court).

“It can be a back-of-envelope thing,” Bruff notes, saying that the president could, if he wanted to, literally write out “I pardon myself, Barack Obama, for all actions undertaken while in office” on a cocktail napkin with a Crayola and have it be official.

Whether it would hold up, though, is an entirely different issue.

When the pardon was written into the Constitution, Bruff said, the language of it was based on British law, which had a principle that you cannot be a judge at your own cause.

It would follow, he says, that someone could not pardon himself.

“I think the better argument is that [Obama] can’t, but there is no law,” says Bruff. “It’s clear there is no law. You could find out, though, if a president self-pardoned and a prosecutor was willing to indict, and the president said ‘I have a pardon,’ I think the courts would [hear the case],” as opposed to dismissing it at the sight of a presidential pardon, like they would in every other instance.

But regardless of whether he should, could, or would commit the crime, the standard consensus is he shouldn’t try to get off scot-free.

“Would it be morally wrong for Obama to pardon himself?” pondered Norcross. “It probably would be wrong. Consider the standard case of disobeying laws in order to bring about good effects. The reason civil disobedience has been so effective is that the people who perpetuate are willing to go to jail for it. It makes it such a powerful thing.”

“Pardoning himself would be deeply wrong,” he said. “Even if he acted conscientiously, he should be willing to accept the consequences.”

He maybe could, but he definitely shouldn’t.