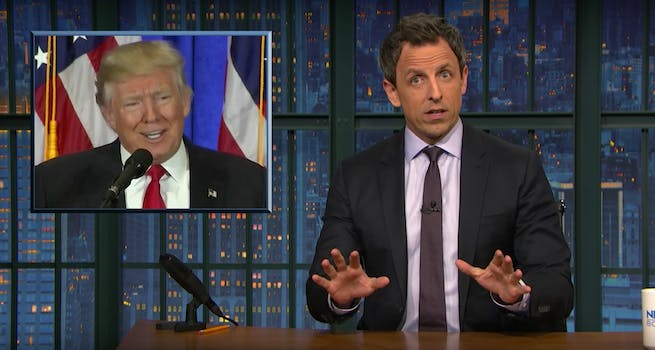 Meyers said Trump makes him feel like we are living in Upside Down land.

In light of the fallout from President-elect Donald Trump’s press conference on Wednesday, Seth Meyers turned his attention to Trump’s treatment of the press and Trump’s conflicts of interest.

The conference saw Trump call BuzzFeed “a failing pile of garbage” and CNN “fake news,” featured staff members who were allegedly paid to cheer, and included a much-criticized response to how he’ll handle his conflicts of interest. (And that doesn’t even touch on the reportedly fake manila folders displayed at the press conference.) It also troubled Meyers, who saw something else in Trump’s interaction with the press.

“Trump’s hostility to the press is usually the kind of thing you see in authoritarian regimes,” he said. “In an especially creepy move, Trump stocked the press conference with employees who laughed at his jokes and shouted out supportive answers to his rhetorical questions.”

Meyers went on to point out some of Trump’s falsehoods, such as Trump’s claim that he was germaphobic (he’s not).

To highlight Trump’s issues with conflicts of interests, Meyers showed video of former ExxonMobil CEO Rex Tillerson, who has ties to Russia, but said in confirmation hearings he has yet to talk to Trump about it.