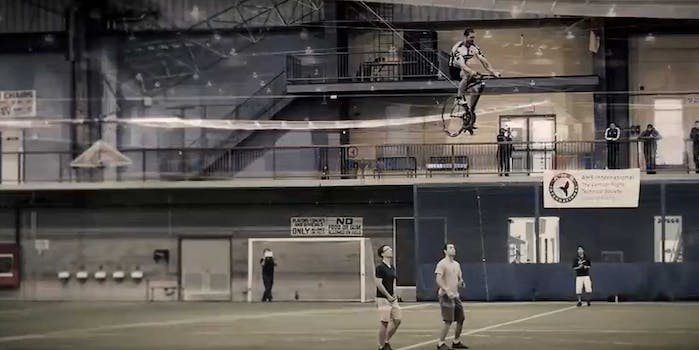 Canadian engineers have achieved the impossible: They've created a helicopter propelled entirely by a human being.

Canadian engineers have achieved the impossible: They’ve created a helicopter propelled entirely by a human being.

In 1980, the American Helicopter Society created the Igor I. Sikorsky prize, a $250,000 bounty for anyone who could create such a device. The contest stipulated that in order for a team to claim its winnings, the machine had to stay in flight for a duration of at least 60 seconds and reach an altitude of three meters (just under 10 feet).

After 33 years and multiple teams trying and failing, AeroVelo—a group of engineering professionals from the University of Toronto—finally did it with their Atlas contraption, which stayed in flight for 64.1 seconds and reached a peak altitude of 3.3 meters. The historic flight, seen below, was uploaded to YouTube on Thursday evening

The Atlas utilized four independent rotors connected to a large truss structure composed of carbon-fiber tubes. It was also at least partially funded by Kickstarter. In May 2012, the AeroVelo team launched a campaign on the popular crowdfunding site in hopes of raising $30,000 to build it. They successfully raised $34,424 from 479 backers. No word yet on whether some of the $250,000 prize will find it’s way back to the Kickstarter donors.