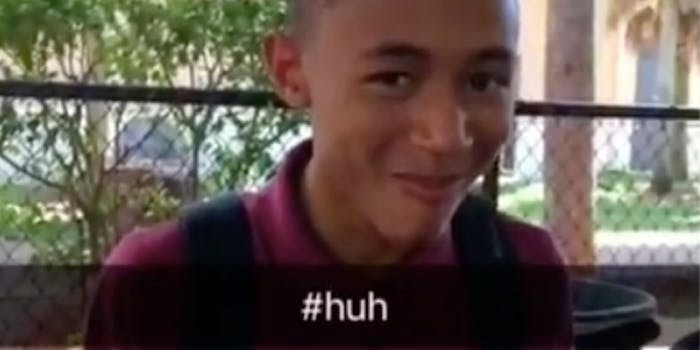 Teens are viciously insulting each other in the #HuhChallenge

The new teen trend is to mock a friend and finish with that annoying 'huuuuuhhhh' noise.

In playground days, before boys grew into sophisticated trollish man-children hiding behind keyboards, you could roast a friend or rival simply by imitating them in a high, nasal tone. “My name is Josh, and I think I’m soooo great! Huuuhhhhh.”  Former kids will recognize that last sound as a whine intended to indicate that the speaker is a stupid pee-pants idiot.

And guess what? “Huhhhh” is back, and better (worse) than ever! Thanks to a viral Twitter video, teens are now savagely mocking one another, second-grade-style, in something called the #HuhChallenge. Check it:

And this is barely scratching the surface: #HuhChallenge has hit Twitter’s trending topic list, and there are hundreds more videos like this.

There doesn’t really seem to be a joke to most of these, other than “I can be as mean as I want, and it doesn’t count because hashtags.” It’s like if the Plastics from Mean Girls put their Burn Book on Twitter, and instead of ostracizing them for it, the other kids hit “like.” And so did kids from other schools. Thousands of them.

It’s a total Lord-of-the-Flies-ass trainwreck, softened only by the ephemeral nature of digital media and the short half-life of memes. The kids still smarting from these sick burns can take comfort in knowing that their peers will stop caring about the #HuhChallenge faster than you can say “Damn, Daniel.”

This one’s pretty good, though, I must admit: