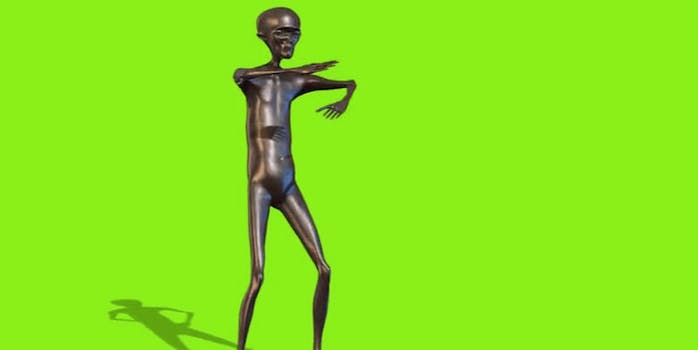 Nobody wants to see this as the foot of their bed.

One thing we can hold true about internet memes is that the creation, evolution, and iterations almost always defy any sense of logic or common sense as we know it. Perhaps no better example of this comes to us from the “Howard the Alien” (also known as the “Money Longer” Alien) meme which has recently gone viral.

It all started with the following video of a free green screen of a metal alien dancing, which was posted by the 3D Animation Land YouTube account in December of 2017.

The video saw a modest amount of views in the first year or so after having been posted, but didn’t pick up real viral steam until an iFunny post from earlier this month which superimposed the Lil Uzi Vert song “Money Longer” over the animation with the caption “imagine having sleep paralysis and seeing this as the foot of bed just fuckin breakin it down and you cant do anything about it like you hear the music in the back and everything bruh.”

It’s unclear exactly how the alien came to be known as “Howard,” but from there the meme exploded, as you can see in just one of the many meme compilations.

The meme is also making the rounds on Twitter because people just can’t seem to get enough of this creepy dancing alien.

Now I have a new favorite meme Howard the alien pic.twitter.com/hR6tOOkLmK

Some people still may not be able to wrap their heads around why this is a thing, exactly. But this is Howard the Alien’s world now, and we’re all just living in it, as it stands at the foot of our beds just fuckin breakin it down while we suffer from sleep paralysis. Sleep tight, everyone!