How to suppress women’s bodies

A "think sheet" that went viral last week begs an important question: Why do we treat women's bodies like public property?

What is it that makes men believe women’s bodies are public property?

I’ve been pondering that question since eighth grade, when a boy at a party somehow got wind that I wasn’t wearing a bra and proceeded to chase me around with a bucket of gutter water to dump on my chest. He asked, “What did you think would happen if you didn’t wear a bra?”

As a married mom approaching forty, I’m less accustomed to street harassment than I was twenty years ago. I’m rarely out and about without my husband, some growing boys, or a 100lb dog who doesn’t like strangers. But last weekend, a guy sitting outside a grocery store somehow felt empowered to bark and howl at me. When I ignored him, he yelled, “That’s right, bitch, you like that shit. You like it.”

I turned, walked up to him, and told him exactly what I thought of what he said. He laughed me off. Then I asked if he wanted me to call my husband over so he could call me a bitch again. That’s when he shut up.

See, that’s the thing—with a few exceptions, women are rarely harassed in this way when we’re with a male partner. Why not? Because when we’re with a man, we are no longer public property. In this one creep’s eyes, I belonged to my husband and he wouldn’t want to upset a man. Not only that, he probably assumed that my husband will defend his property physically.

Most people wouldn’t steal a person’s phone from the table right in front of them. In the same vein, harassers probably wouldn’t harm me if my husband were around. That fact alone is how you know that men who harass women consider us value-less as humans without the context of our “owners.”

So where are boys learning that girls’ bodies are public property? From the grown-ups in their lives of course. They may have witnessed the men in their lives harassing or abusing women or heard them speaking about women like we’re objects. Perhaps they’ve seen it on TV, in video games or in movies, too.

But there are many more insidious ways boys are taught that women’s and girls’ bodies are public property. All too often, sexual harassment like snapping girls’ bras or touching their bodies in the hallways at school is ignored or laughed off as “boys being boys.” Even when boys grab or harass each other as part of jockish hazing or locker-room bullying, that “boys will be boys” excuse is often employed to release the violators of responsibility.

On top of that, some school policies are enforcing the notion that girls’ bodies need to be regulated more rigorously than boys’ are, causing girls to miss class time. One example of this went viral this week, when a tenth grader named Chloee was pulled from class for wearing leggings. She was forced to fill out a “think sheet” reflecting upon her crime, and answered each question about as perfectly as I can imagine anyone could. 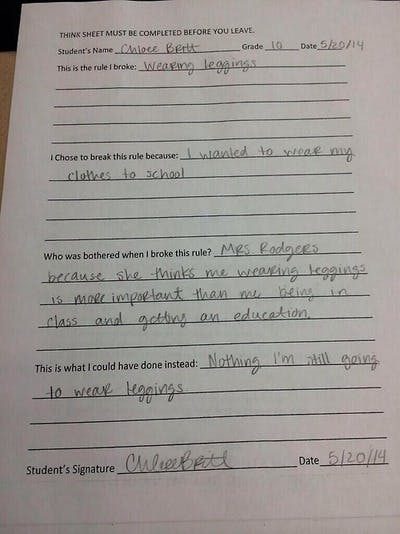 In her column at The Guardian, Jessica Valenti explains that dress codes teach girls to be ashamed of their bodies:

According to educators and even some parents, young women’s outfits—their bodies, really—are too distracting for men to be expected to comport themselves with dignity and respect. It’s the season of the dress code—so instead of teaching girls math or literature, schools are enforcing arbitrary and sexist rules that teach them to be ashamed of their bodies.

I second Valenti’s assertion, but I think gendered dress codes also teach boys that girls’ clothing choices make their bodies into something that belongs to everybody. When a girl’s shorts, exposed bra straps, or leggings merit her being pulled out of class and quite likely humiliated, a very strong message is sent to our sons.

On top of that (as if it needed to get worse), shaming girls about their clothing choices based upon the “fact” that boys can’t be expected to control themselves in the presence of some female skin is a terrible message to our sons about what it means to be male. These policies teach boys to expect very little of themselves and the men around them.

How can parents be expected to teach their sons that women’s bodies are not public property when schools keep underlining the fact that girls’ bodies are, indeed, everybody’s business?

It’s crucial we understand the prevalence of street harassment and abuse. It’s also crucial that we teach all of our kids that they have a right to feel proud of their bodies and the right to feel safe at school or on the street. But that has to start with us, the adults. It’s time we stopped making excuses for kids who choose to behave badly, and time we stood up to administrators who believe a girl’s body is somehow dangerous to boys.

Photo via Magdalena Roeseler/Flickr (CC BY 2.0)