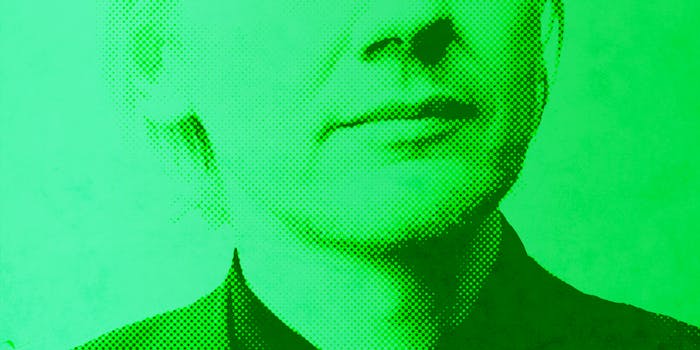 It's really quite simple.

Julian Assange, founder of WikiLeaks, today celebrated a U.N. panel’s ruling that he be allowed to avoid arrest by U.K. authorities.

Assange has claimed asylum in London’s Ecuador embassy since 2012 to avoid extradition to Sweden over a rape claim (and possibly thence to the United States). In those years, a number of people have taken to sending him unsolicited fast food. Rentify CEO George Spencer and Ned Donovan, a journalist and occasional Daily Dot contributor, are two of them.

Have you sent Assange fast food many times?

ND: Pizza the first time. I think it was Domino’s. Sent him some Dunkin’ Donuts this morning—a dozen of them. Was going to do Nando’s—cheeky chicken for a cheeky chicken—but Nando’s couldn’t deliver till 12:15 today, when all the reporters would have left. Hence Dunkin’.

GS: I thought I’d send Jules some donuts to help him celebrate not only evading justice for the indiscriminate leaking of classified-for-good-reason intelligence documents at immense and irrecoverable cost to delicately poised relations between nations, but also as it now seems possible that he will also manage to evade questioning for rape by running down the clock.

@JamesLiamCook @Ned_Donovan At no time during the siege has delivered food been ordered. It is a high stakes embassy siege. Think.

Julian #Assange squints as he comes out to speak on the balcony of Ecuador's embassy in London pic.twitter.com/dZenbXR4n0

GS: The driver called and was unsure whether or not it was a prank, but I reassured him by saying it was indeed for Julian and that we were upstairs in the embassy. I gave him the embassy phone number in case there were any problems. I also told him, cryptically, that he should try the password “Weetabix” if he had any problems. The key was to make sure the driver proceeded with confidence and not trepidation. A big enough tip and making him feel that I was there waiting with Julian was central to this. Photo via Espen Moe/Flickr (CC BY 2.0) | Remix by Max Fleishman