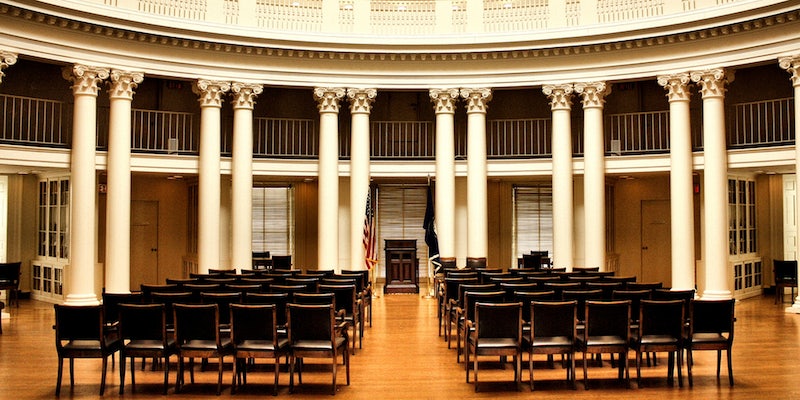 How to be a ‘perfect’ rape victim

It's a game that's impossible to win.

In Rolling Stone’s since-updated apology for their reporting on the University of Virginia rape case, the editors originally wrote: “In the face of new information, there now appear to be discrepancies in Jackie’s account, and we have come to the conclusion that our trust in her was misplaced.” As this story continues to develop, this single and singularly insensitive line has sparked an important conversation about the ways in which we expect rape and sexual assault victims to behave.

On BuzzFeed, Maya Inamura writes in her moving piece about being a “bad” victim of sexual assault, “Victims of trauma often have trouble remembering the exact nature of their assault, including the date on which it occurred, for which my own story of sexual assault should serve as a case in point.” Conversely, we could add, a rape victim who perfectly reproduces every detail of the crime may be greeted with suspicion or accused of “rehearsing” a false report or testimony. To be taken seriously, victims have to remember the assault but they also can’t remember it too well. This is just one of many paradoxical expectations placed on rape and sexual assault victims after they come forward. As Inamura adds: “Jackie is not a perfect victim, but no one is. No one can be, because it’s an impossible standard to attain.”

But it’s a standard we enforce nonetheless. The pressure to be a model victim of rape or sexual assault is in place before it even occurs. Our culture’s ideal victim is one who only leaves the house during the day while sober and modestly dressed; otherwise, we can blame the attack on intoxication, clothing choices, or supposed recklessness. And from the moment of the assault on, we continue to hold victims to contradictory standards of behavior that punish them either way.

Here are just three of the most unbelievable things we believe victims of rape or sexual assault should be able to do:

1) Fight back but remember to stay alive.

At no time is the pressure to perform perfect victimhood more unrealistic than during the assault itself, when victims fear for their lives while experiencing immense physical and emotional pain. Even during this experience, we demand that rape and sexual assault victims fight back in order to prove that they “don’t want it to happen.” Last month, for example, CNN’s Don Lemon asked Joan Tarshis, a woman who has accused Bill Cosby of oral rape, why she didn’t bite Cosby’s penis after he inserted it in her mouth: “You know, there are ways not to perform oral sex if you don’t want to do it.” The reverse implication here, of course, is that Tarshis must have wanted to do it if she didn’t bite.

But this isn’t just a matter of public perception, either. Courts often require evidence of physical struggle in order to determine that a so-called “forcible rape” took place. Two years ago, for instance, the Connecticut Supreme Court overturned a ruling in a sexual assault case on the grounds that the victim was “physically unable to communicate unwillingness to an act.” This would be an unrealistic standard for any victim, but in this case, it was an especially cruel requirement because the victim has cerebral palsy. According to court documents, “[she] has the intellectual functional equivalent of a 3-year-old and cannot verbally communicate.” Despite her condition, the defendant was still set free.

One of the chief problems with requiring victims to physically resist is that rape and sexual assault victims could be either intoxicated or too traumatized to fight back in the moment: The former gives juries grounds to blame the victim, the latter becomes difficult to prove in court. But many rape and sexual assault victims also do not resist because they need to stay alive. Assailants often use violent means to restrain victims or hold weapons to keep the victim from moving. Failing that, they can also use threats of violence to intimidate victims. And, as RAINN notes, “many victims make the good judgment that physical resistance would cause the attacker to become more violent.”

It’s easy for people who have never found themselves in this situation to pontificate about what rape and sexual assault victims should and shouldn’t do during the attack itself. But for the 1 in 5 women who are raped in the U.S., the devil’s bargain between resisting and staying alive is all too real. And this unthinkable choice sets the tone for the victim’s experiences long after the attack itself is over.

2) Don’t be calm in court but also don’t be emotional.

We expect rape and sexual assault victims to be emotional when they testify in court as another form of proof that the assault was “real.” But just as victims have a range of reactions and coping techniques following rape and sexual assault, they also have a variety of courtroom demeanors, especially in the intimidating context of sharing private details in front of strangers and especially the perpetrator. When Anita Hill accused then-Supreme Court nominee Clarence Thomas of sexual harassment, this same standard of emotional proof was brought to bear on her case. Several commentators noted that Hill was “calm,” perhaps “too calm” in her testimony, a bearing that undermined her credibility.

On the other hand, defense attorneys can also fault victims for displaying too much emotion. In a 2011 New York rape case, for example, a courtroom dog was brought in to help a 15-year-old girl testify against her father who had impregnated her. The dog provided necessary comfort to a girl in an unimaginably horrific situation. But even still, one of the father’s lawyers argued that the girls’ display of emotion through her interactions with the dog had swayed the jury. He argued, “Every time she stroked the dog, it sent an unconscious message to the jury that she was under stress because she was telling the truth.” Under this logic, display of emotion in the courtroom is seen as an inherently untrustworthy rhetorical trick, even coming from a 15-year-old girl.

This is another case, then, of being damned if you do and damned if you don’t. Keeping calm is taken as a sign that the testimony is rehearsed and displaying emotion in the courtroom is often seen as a deceitful attempt to persuade the jury.

When a guilty verdict was handed down in the Steubenville, Ohio rape case last year, there was an outpouring of public sympathy for the people who deserved it least. Upon hearing that Trent Mays and Ma’lik Richmond, both teenagers, would be incarcerated for raping an unconscious 16-year-old girl, CNN reporter Poppy Harlow emphasized how “emotional” and “difficult” it was for her to watch Mays and Richmond lose their “promising futures” as “star football players” while barely expressing any sympathy for the victim of their crime.

CNN wasn’t an outlier, either. Several major media outlets, as ThinkProgress observed at the time, either made excuses for the boys or fixated on the fact that the victim was inebriated. Internet commenters, too, predictably matched the tone of this mainstream media reporting.

The message that this Steubenville coverage sent to rape and sexual assault victims was clear: If you seek justice, the public may end up mourning the lost future of your assailants more than they sympathize with your very present pain. In the rare event that you have the support you need to report to the police—and in the even rarer event that your attacker gets prosecuted, convicted, and imprisoned—you will face your own painful future of trauma and potentially public shame while the media wrings its hands over the fate of the guilty party. As the Steubenville victim’s mother had to remind the media at the end of the trial, “This will never leave my daughter.”

In the end, all of our demands on rape and sexual assault victims theoretically lead them to seek justice. We require them to report and to prosecute inorder to prove that they have “truly” been raped. But once they arrive in the courtroom, they face the same contradictory pressures they have dealt with all along. We want justice, of course, but we also don’t seem to want anyone to go to jail.

Trying to behave like a model victim of rape or sexual assault is like walking on a tightrope with gale force winds on either side—it feels futile to try to reach the other side when every step is treacherous. As Daily Dot contributor Lindy West said on Twitter, we want victims to “do everything and its opposite all at once.” These paradoxes aren’t just curious coincidences, either. They are not a random collection of idiosyncratic quirks that inform how we expect victims to behave; they are part of a system that is rigged to protect the guilty and that is designed to mirror the violence that victims have already experienced. Law enforcement, the judicial system, and cultural beliefs all work together to create a climate in which we inherently distrust victims of rape.

In America, rape victims face a system that is built to fail them. And as long as it’s impossible for rape victims to do anything right, our culture and our justice system will never do right by them.