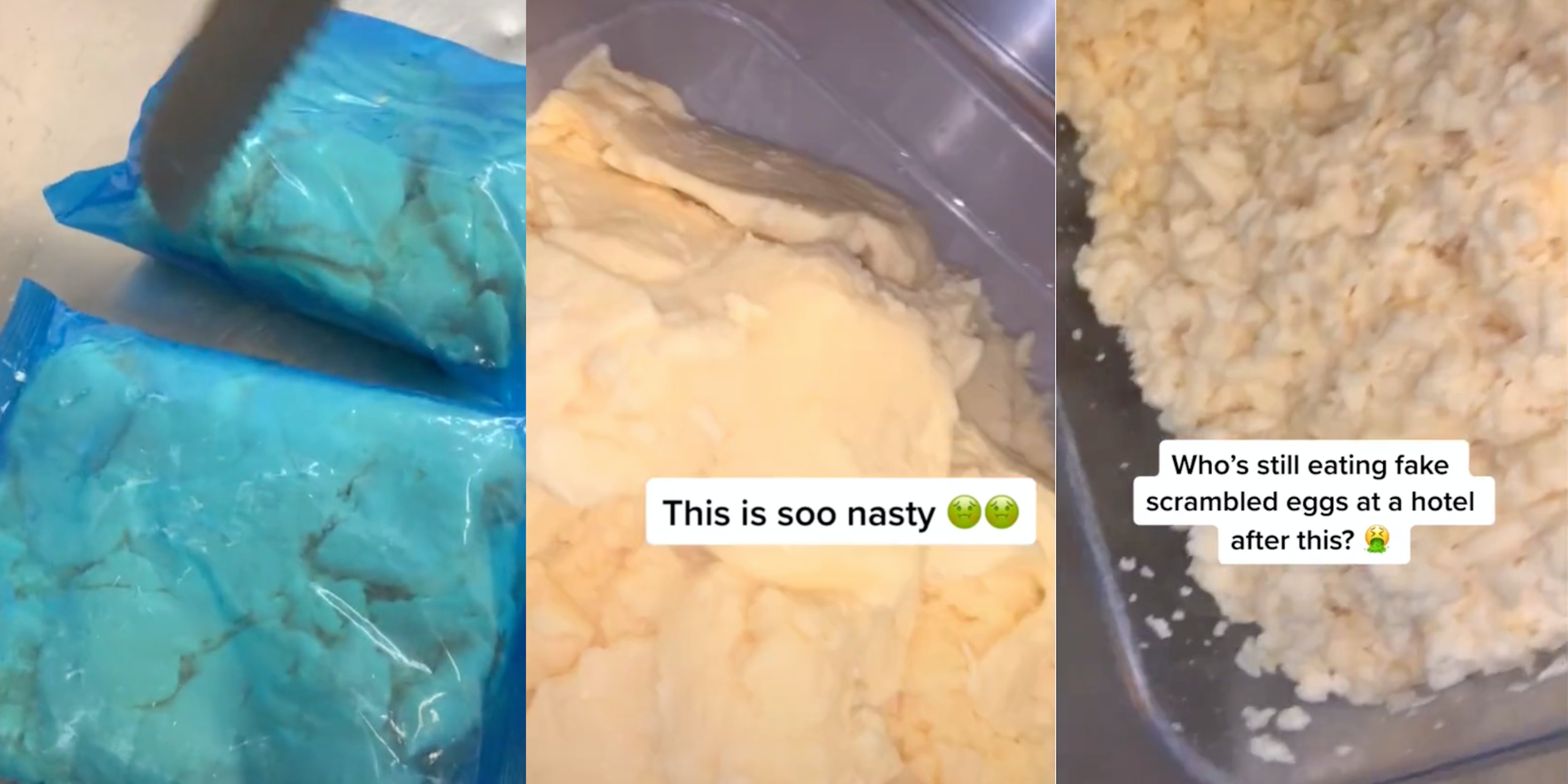 They reportedly come from the Holiday Inn.

There are a few staples of traveling that nearly everyone has experienced. Near the top of this list is the classic hotel breakfast, complete with scrambled eggs, rubbery sausage links, and the occasional brick-hard bagel. A recent TikTok is lifting the veil on how some of these menu items are prepared: Namely, those hotel breakfast eggs.

One TikToker is exposing the process behind those iconic eggs, prompting a range of reactions from viewers. Not everyone is surprised to learn that hotel eggs are not exactly the peak of farm-fresh quality, but that isn’t stopping them from reacting in horror at the TikToker’s big reveal.

In a video that was viewed more than 19 million times before being made private, the user walks viewers through the process of preparing eggs for hotel guests. At the top of the video, she fetches a blue bag with what appears to be powdered eggs inside. She creates a few venting holes before popping the whole bag into a microwave, and then proceeds to dump the contents of the bag into a tray of water for hydration. The eggs then appear to be warmed in an oven, to help them absorb the water, before everything is carefully mashed together and popped into a warmer for serving.

Powdered eggs, like powdered milk, may not look appetizing, but they are not an unhealthy option. Eggs can be powdered by carefully dehydrating them, which enhances their shelf life immensely and also helps with storage and shipping. According to Asking Lot, powdered eggs are very much real eggs, they just come in a different package. And while they may not look very tasty during the prep process, they mostly retain the same nutritional value.

That didn’t stop viewers from reacting in horror and disgust at the reveal. Viewers made sure to answer the TikToker’s question of “who’s still eating scrambled eggs at a hotel after this,” with a resounding “not me.”

The top comment on the video, which earned upward of 120,000 likes before comments were disabled and the video made private, claims the user is going to “show this to my mom who always forced me to wake up at 6am for the hotel breakfast.”

A number of users noted that, while unappealing, using powdered or liquid eggs is nothing new. In fact, a few favorite breakfast items almost certainly contain these less-than-fresh options.

“So y’all gonna stop eating processed foods and McDonald’s too,” one user wondered.

Others shared concern that the TikToker might lose her job over the video. A number of TikTokers have faced unemployment over their viral “behind the scenes” videos, in which they expose company practices, recipes, or hacks.

In this instance, it seems fears that “someone’s losing their job” were unfounded. A comment from the worker proclaims that she’s “still here babyyyyy, me and the bosses laughed about it.”

This claim is bolstered by another breakfast reveal video. Most than a week after the initial video went viral, the TikToker showed herself preparing a few other classic breakfast items, including sausage links and pastries. And, of course, more eggs. As she noted in the caption for the video, she is a “night receptionist,” so she only prepares a few items before the morning crew comes in to finish the job.

The videos appear to come out of a London Holiday Inn Express, according to Snopes.

We attempted to reach out to the TikToker, but she only accepts message requests from friends.