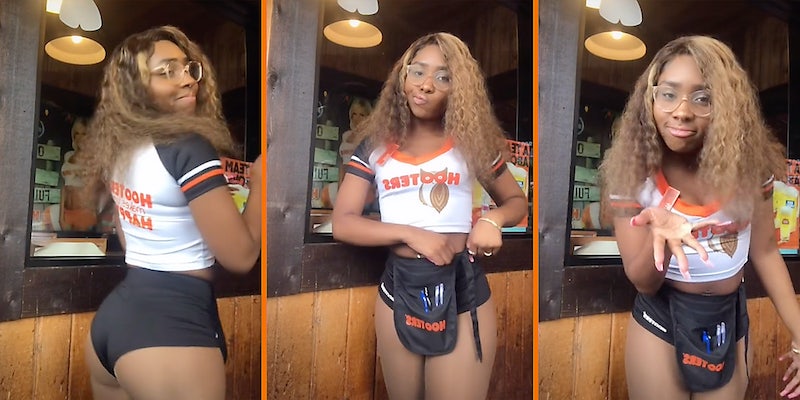 'Praying you don't fart wearing those.'

Hooters is reportedly making a new part of its uniform optional after some employees critiqued it on TikTok.

Over the last week or so, several Hooters servers showed off the new shorts they are required to wear, though they were compared more to “underwear” and “panties.”

A few employees compared the old shorts with the new ones, showing that they are visibly shorter and ride higher on the hip, much like underwear. One server suggested that the new uniform made “half the Hooters girls want to quit.” That employee followed up with a more recent TikTok claiming that after her initial video went viral, the CEO of Hooters contacted her to tell her she can wear the old shorts. That TikTok has more than 31 million views.

Commenters on another TikTok had logistical concerns, like “Where does the wonananana go?” and “Praying you don’t fart wearing those.”

Not all employees had an issue with the uniform. Some said the shorter shorts brought them more money.

The shorts were apparently rolled out to Hooters in Texas, and then locations in other states, in the last month. But Hooters’ uniforms have been a source of criticism for decades. Relaxed uniform requirements were part of a 2010 class-action lawsuit that also involved financial settlements for 400 current and former employees. A server at a Michigan Hooters filed a lawsuit in 2010 after she was put on a month-long “weight probation.”

The Original Hooters Group, which operates franchises in Manhattan, Chicago, and Tampa Bay, told NBC it will not be requiring employees to wear the new shorts. Hooters of America, LLC, which operates in Texas, Oklahoma, and several other states, rolled out the new uniform. In a statement to NBC, it said “These uniforms have been worn for months in several Texas markets and have received overwhelmingly favorable reviews from both Hooters Girls and customers.”

But in a follow-up statement on Saturday, Hooters of America claimed that employees can now “determine which style of shorts best fits their body style and personal image.”