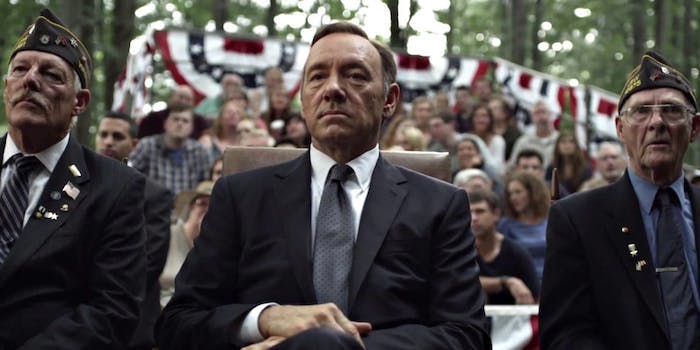 Why Hollywood’s best directors are ditching movies for the Internet

Has the mass exodus begun?

A mass exodus is happening in Hollywood. And fortunately for all of us, it has nothing to do with Ridley Scott.

Okay, so maybe exodus isn’t the right word exactly, but change is afoot in the entertainment industry. Lately, a lot of Hollywood’s top filmmakers have started to move out of film, and onto TV and even the Internet—the last few days alone have actually proven this more than once already. And while there’s still some debate about whether the new “golden age of television” is killing Hollywood, coming to an end, or really existed in the first place, one fact cannot be disputed: Artists are coming to TV and the Internet for the creative freedom they offer.

According to recent reports, Netflix’s plans to adapt the beloved cult film Wet Hot American Summer as a series. With original writer Michael Showalter and director David Wain at the helm, the eight episode series is rumored to return to Camp Firewood as a prequel of sorts.

It makes sense for the future of Netflix’s comedy brand that they would pursue something like Wet Hot American Summer, with the streaming service having already produced new episodes of another cult hit—the much-loved Arrested Development. However, what makes this an interesting decision for Netflix is that it demonstrates how streaming enables more expensive options for storytelling. Rather than just trying to finance another movie, Wain and Showalter have found a way to continue their story in a more in-depth way, and Netflix has gained another property which will instantly be recognizable to the same kind of comedy fans who love Arrested Development. Basically, everybody wins.

What Lee’s move to Vimeo shows is that the Internet affords “serious” directors and auteurs ways to get their projects out into the world without relying on the usual channels of Hollywood. In addition, having an acclaimed director like Spike Lee is good for Vimeo’s growing brand, as they continue to expand with projects like their critically acclaimed web series, High Maintenance. While other directors leave the film industry to pursue TV, Lee isn’t ruling that out either, teaming up with Showtime for an adaptation of his film, She’s Gotta Have It; Lee previously worked with HBO to develop a now-defunct drama called Da Brick.

Finally, Woody Allen announced yesterday that would be developing a show with Amazon. This is particularly revelatory news, because while Allen started out in television (he was a writer on The Sid Caesar Show and several other comedy programs), he has been making movies since the 1960s. That he’s choosing now to do a TV show, and to do an Internet TV show at that, speaks volumes about why Hollywood heavyweights want to work outside of film right now. Granted, given the controversy that has surrounded Allen’s personal life in the last year, there will undoubtedly be some blowback from Amazon’s decision to work with him. However, for better or worse, that Woody Allen of all people (who has consistently made fun of television throughout his filmography) is changing up his career-path this late in life is nothing short of astounding.

Then again, the signs that things were headed this way have been there for awhile. Martin Scorsese and David Fincher each worked on Boardwalk Empire and House of Cards, respectively (Fincher is developing another series for HBO, too). Meanwhile, True Detective was so powerful largely because indie filmmaker Cary Fukunaga directed every episode, earning the show all kinds of praise for being “cinematic.” Then there’s Academy Award-nominated director Lee Daniels—who co-created FOX’s new hit, Empire, along with Emmy-winning writer Danny Strong. (They previously collaborated on The Butler.) And Joss Whedon, a TV and film guru, took to the Internet to release his latest movie, In Your Eyes, through Vimeo’s on-demand platform, giving the platform a boost even before Spike Lee jumped onboard.

Recently, Steven Soderbergh, another auteur filmmaker, brought his Liberace biopic, Behind the Candelabra, to HBO. According to Soderbergh, that rationale was that “more people are going to see it this way anyway.” Soderbergh, a director who’s been extremely critical about the current state of Hollywood, has seemingly left film altogether for TV, choosing instead to produce and direct every episode of Cinemax’s The Knick last year instead (before that, he directed the series K-Street as well). According to Soderbergh, “In terms of cultural real estate, TV is really taking control of a certain kind of conversation that used to be the exclusive domain of movies. It’s an interesting new model if you’re someone who likes your stories to go narrow and deep; it can be a novel on screen.”

Maybe there’s also something to be said for the way film, television, and the use of the Internet are merging. It’s a widely accepted notion that the conceit of series television is pretty much moving to the Internet as it is, but what about what that allows in terms of content? Writer/director Jill Soloway, creator of one of Sunday’s big Golden Globes winners, Transparent, has said that she pretty much sees the show as a five-hour movie. One could potentially say that same thing about True Detective (except it would be an eight-hour movie, in that case).

It’s fitting then that Wet Hot American Summer would move to Netflix rather than trying to continue throughout one or more traditional sequels. With Netflix, you’ll be able to stream the original film and the new television show, all from the comfort of your home. This is why Pee-Wee Herman and Adam Sandler are moving to Netflix, too. Be it TV or film, the Internet allows you more instantaneous access to the content you care about, thereby blurring the line between cinema and television forever.

Nevertheless, some of those lines are still there. The New Yorker’s Emily Nussbaum, for one, firmly asserts that, “TV shows get more ‘cinematic,’ to use a somewhat hand-waving category, every year. But TV is not movies. It’s an episodic art form.” However, Nussbaum also notes the long-held belief that “directors go to movies for art and to TV for money” is starting to crumble.

This is what the influx of filmmakers who are leaving traditional studio movies for new platforms and new mediums is really all about. It’s unlikely that Jill Soloway would’ve been able to get Transparent, an incredibly personal story for her, greenlit as a movie without having to jump through numerous hoops, especially when an Oscar-winning director like Soderbergh wasn’t able to get Behind the Candelabra made in the studio system. But with avenues like Amazon and HBO, these projects were not only made, but heavily lauded and championed. That’s because, for the first time in history, TV, and now the Internet, allow you to take more risks than the movie industry. On a fundamental level, TV and the Internet are no longer where you go to sellout. They are where you go to make, as Nussbaum puts it, “art.”

Consider this: England’s Steve McQueen, director of critically-acclaimed movies such as Hunger and Shame, as well as last year’s Best Picture Winner and possibly the most important film of the decade, 12 Years a Slave, rode his wave of success into directing a pilot for HBO. Ten years ago, this would’ve never happened. “TV? As a followup to an Oscar-winning film? Preposterous!” But today, it was McQueen’s logical next step.

Not that everyone feels so great about this brave new world created by TV and the Internet. After getting fired by NBC, Community’s Dan Harmon (who, ironically, will be taking his show to Yahoo later this year) bitterly told Grantland in 2013, “That there’s a difference between any of this shit is the greatest joke that television ever told. I mean, as the creator of Community, I’m telling you: It’s all garbage.”

The same year, the Guardian’s Mark Lawson relayed an anecdote wherein “the British producer Tony Garnett, responsible for drama from Cathy Come Home to This Life, told me in a recent interview that, if he were starting now, he would not go into the TV industry at all, but turn to online.” Lawson continued, “And, notoriously, the most talked-about TV fiction this year—Kevin Spacey‘s remake of House of Cards—was released by Netflix online rather than on TV.”

Lawson used this story as evidence to conclude that “it remains terrifyingly unclear… how the economics of online television might work.” He wrote, “Soderbergh’s second golden age may already be over.”

Yet Lawson’s argument that the latest golden age of TV may be ending because TV is moving to the unstable realm of the Internet already looks invalidated two years later, when the Internet is giving us more great movies and television than ever, and increasing numbers of platforms are churning out complex, and boundlessly entertaining material. In this light, TV’s modern golden age is not being killed by the Internet, it’s being enabled by it. Harmon’s argument, on the other hand, functions solely based on the idea that art and commerce can never mix, which is more of a personal belief than an absolute truth.

It is true, however, that as long as there is profit to be made on television and the Internet, “art” will always play second-fiddle to money. Furthermore, it is also true that this new terrain is still being charted, forcing us to adjust to the shifting ways we consume media all the time. But what we know for sure is that cinema is no longer the ultimate marriage of artistic ambition and popular entertainment. As Hollywood’s most talented filmmakers leave the multiplex for our home entertainment platforms, the results only seem to get richer and deeper. Maybe it is all unsustainable, but for now, it looks as if the auteurs have left the roost.