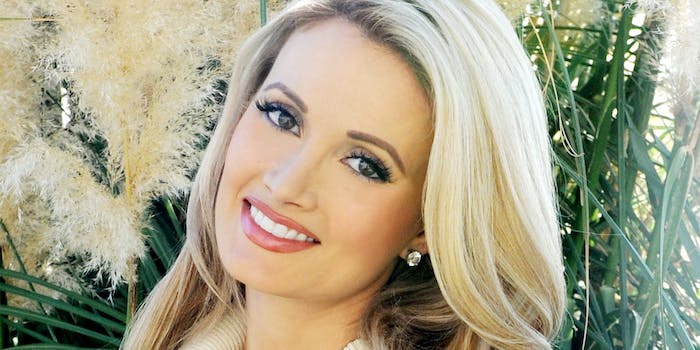 It's not the only ghost story she has.

Once home to Playboy founder Hugh Hefner and many of the infamous parties he would throw over the decades, the Playboy Mansion contains a plethora of stories within its walls. But according to one of the people who lived there, it might also contain a ghost or two.

The story behind the haunting of the Playboy Mansion wasn’t something that Holly Madison, who dated Hefner from 2001 to 2008 and was one of the stars of The Girls Next Door, addressed out of nowhere. The topic of ghosts first came up in a TikTok video after @gothicparainvestigator, in a now-deleted comment, asked Madison if she owned anything that was haunted.

In a different TikTok video, Madison told her more than 790,000 followers about a recent ghost story. According to Madison, “there had been a lot of ghostly activity lately” in her house last summer, something she mentioned to her boyfriend. Her boyfriend, who was on speaker phone at the time, responded by telling the ghost to “mess with Holly, mess with Holly,” something that made them both laugh.

Soon after she got off the phone, Madison passed her kitchen island, where she found the word “HI” scribbled into the wood, which Madison showed viewers with the app’s green screen function.

“Now I don’t know what the substance was, I practically had to scrape it off, but it wasn’t there before,” she explained. “I’m very particular about my kitchen and about it being clean and it hadn’t been there before, so when I saw that after he was telling the ghost to mess with me, I was like, ‘Somebody trying to say hi.’”

However, the story behind the ghost in Madison’s house prompted @culitshuffle to ask about whether there were any ghosts in one of Madison’s previous homes: the Playboy Mansion. Madison’s response? Yes!

“Not long after I moved in, I was working out in the gym and I full-on saw a woman come out of the bathroom and just walk across the room and disappear,” Madison explained. “And that was the first thing.”

As Madison pointed out, she covered the topic of the Playboy Mansion being haunted more in-depth on an episode of the podcast Ghost Magnet with Bridget Marquardt if people are curious to hear more stories. But if this story is the one she offered on TikTok, we can only imagine what ghost stories that house contains.