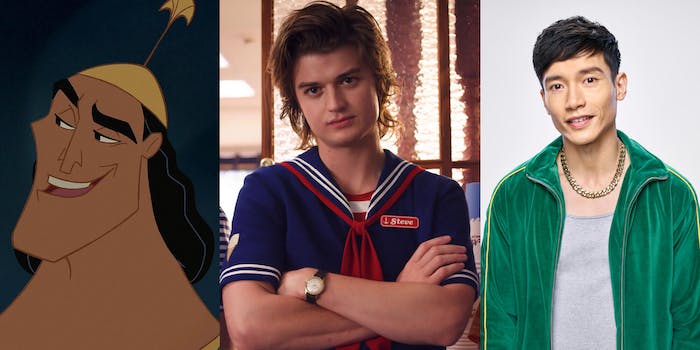 What on earth is a himbo?

The internet's in love. But is this archetype problematic?

The term “himbo” was first introduced to many Twitter users Sunday when a tweet declared the word to be ableist. But the phrase has been in use for 32 years—at least according to Merriam-Webster, which traces the origins of “himbo” to 1988.

A mashup of the words “him” and “bimbo,” a himbo is defined as “an attractive but vacuous man.” As the term began trending on Twitter, many users spoke up about fictional characters they thought could fit the description.

“In honor of the himbo discourse, this is a Jason Mendoza appreciation post,” Twitter user @latkedelrey said.

Attached to the tweet were two images of Mendoza, a character from The Good Place—played by actor Manny Jacinto—who is often oblivious but also very friendly.

User @VermyFox decided that an O.G. version of the himbo could be found in Kronk of The Emperor’s New Groove, the dimwitted right-hand man of antagonist Yzma.

“Kronk, the purest of himbo,” @VermyFox tweeted. “Sure he wasn’t that bright, but he made up for it with a lot of caring for others and unexpected skills such as baking. Kindness can be kinda hot.”

“Anyways stan Robin and her himbo best friend,” @_krystyna_565 tweeted along with a picture of characters Robin Buckley and Harrington next to each other.

But why has “himbo” suddenly re-emerged in the discourse as a trending topic on Twitter? The answer is primarily in response to a tweet by @fangirlJeanne, who took to the platform to call the word ableist. For something to be ableist it must be “discrimination or prejudice against individuals with disabilities,” and @fangirlJeanne posted that the himbo’s “lack of intelligence” took the use of the word as an endearing phrase off the table.

“‘Himbo’ is ableist,” @fangirlJeanne said. “I find fetishizing someone’s supposed lack of intelligence to be predatory. Why would you desire someone who seemingly has less power than you? Why is that sexy? Why is that different from praying on underage kids? It’s not.”

Many people took to Twitter to mock the tweet as absurd and say that the idea of a himbo being dumb is an oversimplification of the concept anyway.

“A himbo is not defined by the presence or absence of ‘intelligence,’” Twitter user @sqiouyilu said. “A himbo is defined by his gullibility. He is pure of heart and so optimistic about others that he is naive. He trusts what he is told, leading to hilariously misconstrued situations — that he handles with grace.”

“Also, to clarify: as a character archetype, the ‘himbo’ is not just ‘unintellectual beefy dude’—those dudes are often jerks in stories. The appeal of a ‘himbo’ is that he has a heart of gold. He’s a good person, he’s safe, and he’s also funny! And *that’s* why he’s lovable,” @_ElizabethMay said.

Meanwhile, some users were much more direct in their critiques of the “himbo is ableist” tweet and its author.

“I read the himbo tweet and all I can say is someone clearly operating from a conception of themselves as too smart to ethically fuck dumb people misspelling ‘preying’ is top tier,” @skullmandible tweeted.