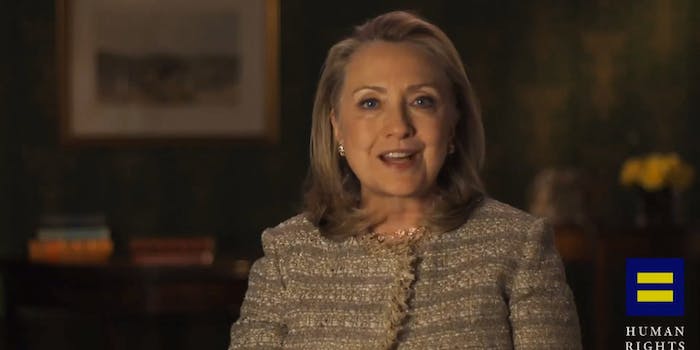 In a move she had been planning since stepping down as Secretary of State, Clinton announced her support for gay marriage in a YouTube video for the Human Rights Campaign.

Former Secretary of State Hillary Clinton came out in support for same-sex marriage in a video with the Human Rights Campaign (HRC) on Monday.

“LGBT Americans are our colleagues, our teachers, our soldiers, our friends, our loved ones,” Clinton said. “And they are full and equal citizens and they deserve the rights of citizenship. That includes marriage.”

The announcement comes as a change in position for Clinton. She officially opposed same-sex marriage—but supported civil unions—as a presidential candidate in 2008. According to CBS News, the move has been anticipated ever since Clinton stepped down from the Obama administration on Feb. 1.

Clinton explains that her views on same-sex marriage have changed over the years because of the people she’s known, her experience as Secretary of State, and her faith. And as a parent who watched her own daughter Chelsea marry the love of her life, she wants every parent to be able to have that same joy.

“To deny that opportunity to any of our daughters and sons solely on the basis of who they are and who they love is to deny them the chance to live up to their own God-given potential,” Clinton added.

As Secretary of State, Clinton changed the State Department’s benefit policy so that same-sex partners of American diplomats would be offered equal benefits and protections as heterosexual partners. She also declared that “gay rights are human rights and human rights are gay rights” during a speech she gave in Geneva in December 2011 and said that the U.S. would defend those rights.

Clinton’s announcement comes just days after Sen. Rob Portman, R-Ohio, reversed his position on same-sex marriage after his son revealed to him that he was gay. President Obama announced his support for same-sex marriage last May, the first current U.S. President to do so.

The Supreme Court is set to hear oral arguments on California’s Proposition 8 measure, which bans gay marriage, and the constitutionality of the Defense of Marriage Act—which President Bill Clinton signed but now believes to be unconstitutional— next week.

According to HRC’s Fred Sainz, Clinton came to them about making a video after she left the State Department, and cited the impending Supreme Court hearings as her reason.

“The president believes that anytime a public official of stature steps forward to embrace a commitment that he shares to equality, he thinks it’s a good thing,” White House spokesman Jay Carney told the Associated Press.

However, Clinton knows that there’s still a long way to go for the American LGBT community to gain equality.

“The journey is far from over, and therefore we must keep working to make our country freer and fairer, and to continue to inspire the faith the world puts in our leadership,” Clinton said. “In doing so, we will keep moving closer and closer to that more perfect union promised to us all.”