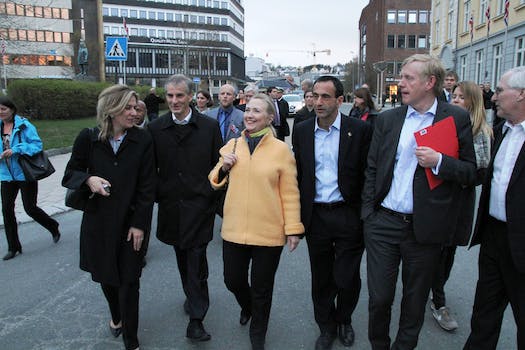 What Hillary Clinton’s campaign shakeup says about the 2016 race

Hillary might be able to take the vote by focusing on issues—but if voters smell a rat, her savvy approach could backfire.

After being brought down by sexism in 2008, Hillary Clinton is back on the national stage, but according to CNN, she’s refocusing her campaign. In place of her 2008 mantra, “ I’m in to win,” she’s adopting a more low-key, but still hard-hitting, strategy: Hillary plans to avoid using the first-person altogether. Her decision to refocus her campaign on issues and direct addresses to voters might seem strange, but it’s actually a smart move to meet voters where they are, while dispelling the air of inevitability on the Internet about her presidency.

The American political landscape has shifted markedly in the past eight years, and Clinton is well-positioned to take advantage of it. Facing off across Jeb Bush or Scott Walker, the presumptive Republican nominees with the most clout—who may end up forming a combined ticket to address the looming divide in GOP voters—her approach to campaigning needs to consider a number of factors she ignored in 2008 at her own cost.

Barack Obama took office in the wake of a campaign heavily focused on issues and giving voters the sense of a president who would be working with them. Clinton is following suit, taking the strategy of making a “concerted effort to try and make her candidacy seem far less focused on her winning than on listening to the concerns of voters,” as CNN reports. It’s an intelligent campaign move.

Her approach to campaigning needs to consider a number of factors she ignored in 2008 at her own cost.

Clinton and her advisors realize that basing a platform on her alone, her gender, her marriage, and her family history won’t be an effective path to the White House. Instead, the revitalized Clinton campaign will explore issues directly with voters, as Obama did in 2008 and continues to do today to great success, and it will likely also stress her experience. Unlike Obama, who entered the White House with relatively scant political experience (i.e., less than ten years in the Illinois State Senate), Clinton has the benefit of eight years participating in policy reform at the White House, another eight years in the senate, and four years at the State Department. That experience, she’s likely to argue, will help her achieve the goals that voters want to see.

Though Clinton has significant political experience, being cautious when it comes to making the election solely about her is the right way to proceed with her campaign; touting experience enough isn’t enough to sway public opinion—especially given her recent misstep regarding private emails. Viewing the election as a foregone conclusion and a coronation is likely to alienate voters, who want a candidate they can, to borrow from the Obama campaign, believe in. A Clinton who directly communicates with voters and spends time at town hall meetings is one who will be perceived as willing to work with voters to identify their concerns and achieve their goals.

Thus, it’s not surprising that her campaign strategy is focused less on large rallies and big speeches and much more on smaller campaign events. Though recent events have been targeted at major donors, that’s likely to shift once she announces her candidacy; in a country where many Americans are struggling with a faltering economy, a smart candidate will connect with them on a personal level rather than continuing to distancing herself from voters.

This is especially important in an era when those voters may be viewing political dynasties with some suspicion. With Jeb Bush a likely Republican candidate, the election could become one of established political family versus established political family, unless Clinton sets herself apart from her husband. Hunter Walker at Business Insider writes: “Family ties could be an obstacle for both Clinton and Bush as they mull whether to enter the 2016 race. … A majority of respondents said both candidates would ‘represent too much of a return to the policies of the past’ if they were elected.”

By making it clear that her policies, politics, and approach to governance are distinct from Bill Clinton’s, she’ll be offering voters a clear alternative to address concerns about the fear of dynasty. This is no longer the Kennedy era, and people want new faces. That’s hard to find in the Democratic party, which is growing old, with relatively few young political operators, the New York Times notes. The Clinton campaign itself desperately needs fresh blood to shake itself up.

However, as Ryan Lizza points out at the New Yorker, she may have trouble with that. “Clinton can’t present herself as a novelty,” Lizza writes. “She’ll be 69 on Election Day in 2016 and has been a national figure for a quarter century. The last politician to become president after a similarly long and distinguished career was George H.W. Bush.”

The Clinton campaign itself desperately needs fresh blood to shake itself up.

Hillary Clinton clearly wants people to vote for her as a candidate, not on the basis of who she’s married to, and voters may respond to that. President Bill Clinton left office with a 66 percent approval rating, and continues to be popular today. Despite that popular support, however, CNN reports that he won’t be taking a role in early campaigning and Clinton staff may not rely on him as heavily as they did in 2008.

While Jeb Bush might attempt to woo the vote in the same way with the folksy, down-home style many Republicans affect in an attempt to appeal to their base, it could be a tough sell for voters suspicious of a party that’s been viewed as highly obstructionist and in some cases out of touch with what voters, including those in their own party, want.

“Sixty-two percent of Republicans think that their legislators have lost touch with GOP voters from throughout the nation,” reports Rasmussen polling. Republicans who hope to take the presidency need to overcome that problem and may only be able to do so by distancing themselves from the current party elite. Clinton, at least, hopes to rely on Democratic support, including from the Obama team, which currently has a 47 percent approval rating. Those numbers aren’t great, but they’re holding steady.

Politico has Clinton winning by a fairly significant margin in a number of states in early opinion polls, suggesting that she already has popular support to build on, if she can capitalize on it and not fall into the same traps as 2008. In her previous campaign, Clinton’s team made the mistake of believing that constituents would vote for a gender, not a candidate, and they’re unlikely to make the same error again. Thus, refusing to set herself aside for special treatment will also be a wise campaign move.

Rather than relying on the potential for breaking the glass ceiling of the White House, in other words, Clinton should be setting her gender aside. As in 2008, Clinton is likely to face sexist attacks during her campaign no matter how much she wants to move her gender to the background, and she’ll need the tools to redirect the conversation.

According to reports, Hillary’s campaign shakeup has also taken place behind the scenes. “Collectively, Clinton’s team represents a break from the past,” writes the Washington Post. “With few exceptions, none of the new team played the most senior roles in her 2008 campaign, and many worked actively against her as part of the Obama operation. More hiring is underway, filling out press, research, digital, political, field and other departments.”

If CNN’s reports about rumors within the campaign are true, this level of strategizing also indicates that Clinton isn’t relying on “anything but another Bush” as a realistic campaign platform, which didn’t work for Kerry in 2004, either. While liberal and centrist voters might be determined to avoid perpetuating the Bush dynasty, you need to give people something to vote for, not just against.

After being burned in 2008, it appears that the Clinton campaign has finished applying ice and aloe, and it’s ready to play for keeps this time.