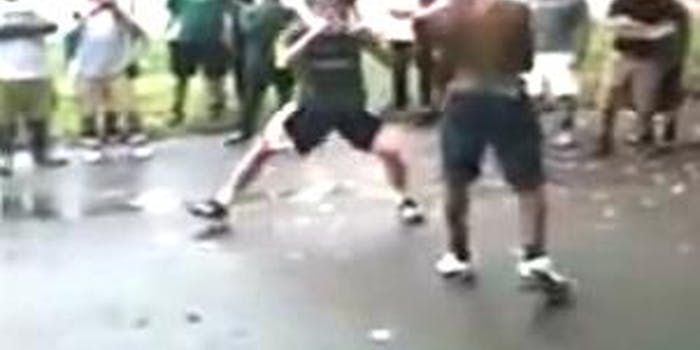 The first rule of Fight Club is you do not talk about Fight Club. The second rule? You do not promote the group on YouTube or Facebook.

YouTube videos depicting Lindbergh High School students violently fighting each other up in parks and parking lots were taken down after Missouri school officials were tipped off by a concerned parent. An associated Facebook group was also deleted.

A Fox News affiliate in St. Louis, however, captured some of the footage in a recent segment. Warning: The clips are extremely graphic.

Lindbergh High School administrators have met with some of the students in the videos and have not yet decided on whether they will be punished.

“Unless it’s being organized at school—and we don’t have any evidence of that now—it’s not a school discipline issue,” district spokeswoman Beth Johnston told the The St. Louis Post-Dispatch. “It’s a dangerous activity, and it’s not something we want to encourage at all. (Principals) are counseling them on why this is not appropriate.”

The Facebook group for the fight club, called Lindbergh Fights, had 124 friends before it was taken down at the request of the district, the New York Post reported.