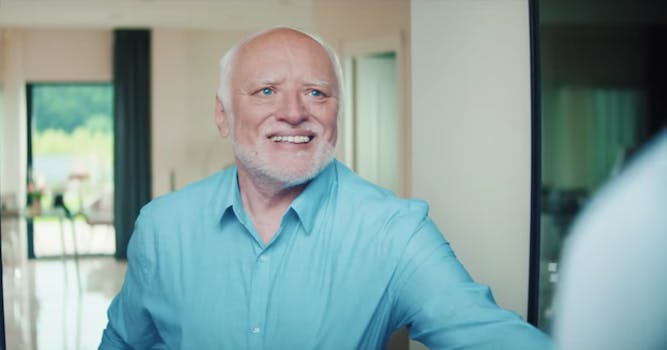 András Arató, known on the internet as “Hide the Pain Harold,” is now using his meme persona to sell tech products. In a commercial for the German retail site Otto, Arató plays Harold, the character based on a series of stock photos that he posed for several years ago. Two delivery men appear at his door with an Acer Predator gaming laptop, and Harold quickly grabs it and starts playing a game. The delivery men, meanwhile, look around the house and notice framed photos of the stock photos where Harold looks like he is smiling while hiding his pain. It’s a commercial you’d appreciate only if you’ve been on the internet for a while, but since it is advertising laptops, it seems like the company knows its target market well.

Check out the commercial here:

In an interview with the Daily Dot earlier this year, Arató said that he was comfortable with his “Harold” persona—he regularly updates his social accounts and chats with fans. Although being an internet meme hasn’t made him rich, he has led a fulfilling career as a lighting technician. He accidentally became a stock photo model after a photographer noticed Arató’s selfies online and sold the photos to a website. Then people on the internet saw the photos and turned Arató in a meme.

It looks like “Harold” isn’t going away, especially if Arató happily agrees to keep acting out the character. Earlier this year, he appeared in a music video for Cloud 9+ and a video about Manchester for the website Dugout. With this commercial, it looks like Harold is only getting more popular with his fanbase.