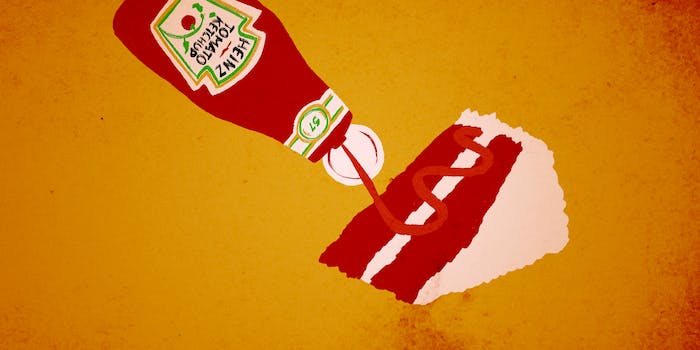 Ketchup is a condiment used to spruce up many a dish. It makes fries taste better.

Hamburger with nothin but ketchup the goat. If u put anythin on a sammich besides ketchup u weird

It’s good on a hot dog, even if haters don’t agree.

#ConfessYourUnpopularOpinion The best condiment on a hot dog is ketchup.

It’s perfect for when you’re hungover and want something sweet.

eating cake as a hungover 20 year old in bed, this is true adulthood right here kids

When cake and ketchup are at least 1,000 miles apart, all is good in the world. So who in their right mind thought it was a good idea to bake a ketchup cake? Someone from Reddit is the answer. User Big_Black_Cat was the one to notice that the back of his Canadian Heinz ketchup bottle offered a recipe for such an abomination.

Then, against all common sense, gregnuttle decided to actually bake it, chronicling his culinary adventure on YouTube and Imgur.

No one was more confused about this than other redditors. And rightfully so. A ketchup cake is a crime against humanity, and hundred of people had strong opinions about this stomach-churning cake suggestion that no one asked for.

This comment set the tone for what would become a thread of shock and confectionery outrage.

After gregnuttle finished cooking the ketchup cake, he uploaded a video of his dog eating it.

Canine abuse at its finest.

Everything makes sense now. This is all Canada’s fault.

So there you have it. A recipe for a ketchup cake exists in the world, and people are actually making it. How could Heinz Canada do this? After all the talk of free healthcare, cheap living, and Canadian niceness, you decide to mix ketchup with cake. If Trump wins the presidency, there’s going to be millions of Americans with nowhere to go.