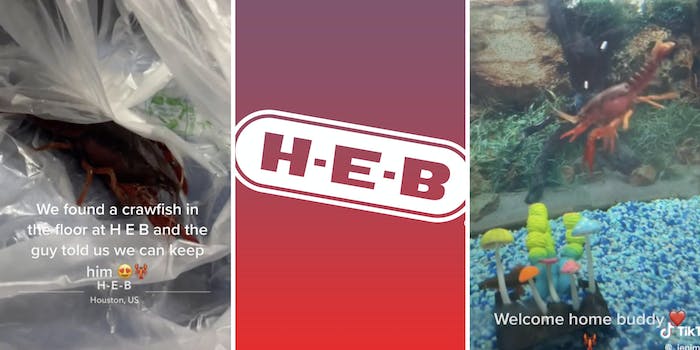 ‘A second chance at life’: Woman finds discarded crawfish on the floor at HEB. Worker says she can keep it. She takes it home and raises it

'He don’t know how lucky he really is.'

In a viral video, TikToker Jeni Mejia (@_jenimejia_) claims she found a discarded crawfish on the floor at the Texas-based grocery store, HEB, and was told she could keep it.

Mejia captioned the video: “Gave a crawfish a second chance at life.” The video now has over 2.5 million views.

Among those asking for updates of the new pet, some TikTok users were skeptical of the behavior of a crawfish in a tank.

“Um- you can’t just put him in a tank with the others,” one user commented. Mejia responded: “My tank is big enough that the crawfish don’t touch my other fishes. I had one before.”

“He [about] to eat all ur fish…[a crawfish] ate my goldfish when I was little,” @Longhauler5150 said.

“He don’t know how lucky he really is,” TikToker Christian Ochoa said.

Each year, Louisiana farmers produce more than 130 million pounds of crawfish for consumption. However, crawfish are pets in many parts of the world (North America, Australia, and New Zealand most notably) because the crustaceans are easy to care for. They can live for 3-8 years, can co-exist with fish but it depends what kind, and do OK in household fish tanks.

In a second video, Mejia shared an update with her followers. She proceeded to show the crawfish in the tank, eating and hiding around a ship structure.

Commenters were happy to see him in his new home.

“Now he’s telling all the fishes how he was almost prepared by h.e.b probably shouldn’t mention h.e.b in his presence,” one user commented.

“Is it sad that all I’m think[ing] about is the fact that he’ll probably taste better coming from clean water and clean food,” TikToker Tierra Fenceroy said.

After her comments filled with more requests for another update, Mejia posted one last video of her pet on his 6th day in the new home and reports that he has not eaten any of her fish. Commenters have named him Crawford and are invested in his journey.

The Daily Dot reached out to Mejia via TikTok comment, and HEB via email.