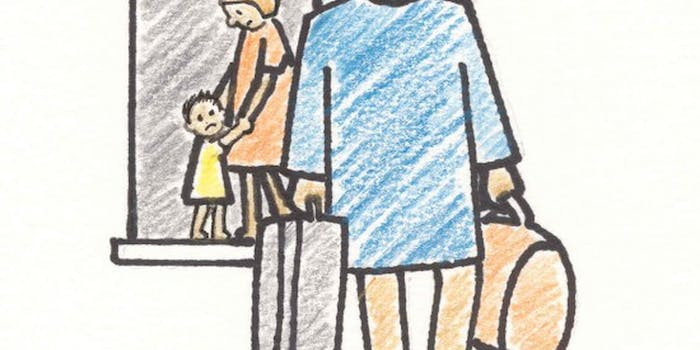 No, Heather Armstrong is not renaming her blog "Divooce."

A mommy blogger who spent the last few years publicly discussing the growth of her young family now faces the more painful challenge of documenting that family’s dissolution.

On Jan. 17, Heather Armstrong and her husband and business partner, Jon, both announced a trial separation on their respective blogs.

Heather Armstrong’s blog Dooce is one of the earliest and arguably the most successful blogs on the Net. In 2009, Armstrong ranked 26 on Forbes’ list of the most influential women in media.

But Dooce has been famous since 2002, when Heather Armstrong, now a married mommy blogger, was still Heather Hamilton, single and childfree. In those days, she blogged snarky observations about workplace issues (her job in particular). This led to her getting fired, and turned her pseudonym into an Internet verb: to be “dooced” is to lose your job because of something you posted online.

Fortunately for Armstrong, getting dooced gained her enough readers to eventually support herself, and then her family, solely on her blog’s ad revenue. In her “About me” autobiography (written when her marriage was still going strong), she said:

“I am married to a charming geek named Jon ….In October 2005 I began running enough ads on this website that my husband was able to quit his office job. That’s when dooce.com became my full-time job, and Jon took charge of the business end of things. I do all the creative work, and he interfaces with our ad network and makes sure all the code is working where it needs to work. It’s a family business …”

Only that business is breaking up along with the family. When Jon announced the separation on his blog, he noted, “As a part of this, Heather has asked me to find work outside of Armstrong Media.”

Dooce fans are largely dismayed by the news, and mentions of Dooce have been all over Twitter since the story broke.

@Meshbetty said, “I have been following Dooce for years. Can’t believe her post today. So sad. Really feel for the whole family.”

Sneha_goud observed, “Mommy bloggers getting divorced really upsets me. Almost as much as the description ‘mommy blogger.’”

Amychester75  shared a possibly incongruous wish for a blogger as public as Dooce: “I’m so sorry for what you all are going through… I wish you could have privacy.”

But iKristen took a more realistic view: “Why are people getting mad because people are talking about dooce being separated? She made it VERY public…idgi [I don’t get it].”

Not everyone was surprised by the breakup. Two weeks before the Armstrongs’ separation announcements, Get Off My Internets said, “Readers of  Dooce.com are starting to wonder if there’s trouble in paradise. Dooce’s husband has been publishing vague posts about something being wrong for the last month or so, and regular readers are drawing their own conclusions.”

Blogger Pauline Gaines, who also tweets as @divorcedpauline, mentioned her “[m]ixed feelings that my post on Dooce’s separation—not my best writing—was one of my highest traffic days ever.”

Gaines’s post at Perils of Divorced Pauline describes how she first started getting search-engine hits for “Dooce divorce” a couple of weeks ago but initially thought nothing of it:

“Because I write a blog about divorce and I reference other bloggers and writers I admire, I often get odd search engine referrals incorporating the two … terms such as ‘who is Anne Lamott’s ex-husband?’ lead to my site. Sometimes I wish search engine referrals came with an e-mail or twitter address so I could respond with, ‘If you actually read any of Anne Lamott’s books, you would know she has never been married’ or ‘Honestly, I have no idea if Dooce is getting divorced’.”

Despite the Internet’s reputation as a haven for schadenfreude, little was on evidence.

Divorced Pauline wrote, “I scanned the hundreds of comments in response to each of their blog posts and I had …Relief, but surprise, that no trolls were casting judgment. All the comments that I have read have been sensitive, heartfelt and supportive. Considering all the divorce backlash skulking around the Internet these days, I was really sort of stunned.”