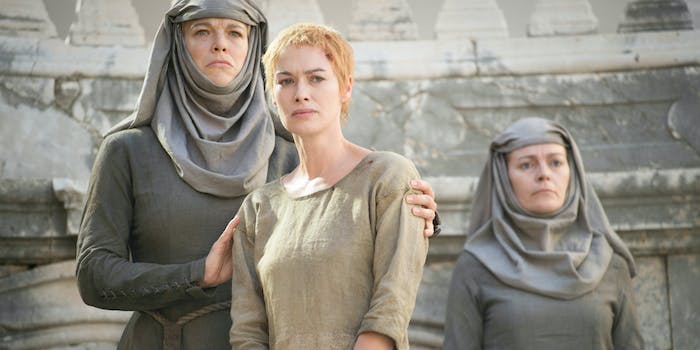 Game of Thrones was both lauded and derided for its depiction of violence—especially toward the female characters—over its eight-year run, giving us moments that stuck in our minds long after they aired. But in one of those cases, the act of filming a torturous act was just as tortuous as it looked on TV.

Hannah Waddingham is currently starring in Ted Lasso, but a few years ago, she had a very memorable role on Game of Thrones as Septa Unella, the nun-like character who hovered over Cersei Lannister in captivity and seemed to take joy in watching Cersei’s walk of shame. She quickly became a meme (aka the Shame Lady), but by season 6, Cersei had gotten her revenge. When we last see her in the season 6 finale, “The Winds of Winter,” Septa Unella is strapped to a table and left with the Mountain after Cersei poured a carafe of wine on her head.

But as Waddingham told Collider’s Ladies Night After Hours, filming the scene was basically torture, calling it “the worst day of my life” other than childbirth. On the day of shooting, she was strapped to the table as liquid was poured over her face over and over again, which made both her and co-star Lena Headey incredibly uncomfortable. Waddingham noting that “I’ve basically just been waterboarded for 10 hours.”

“There I was strapped to a wooden table with proper big straps for 10 hours,” she said. “And definitely, other than childbirth, it was the worst day of my life. Because Lena was uncomfortable pouring liquid in my face for that long, and I was beside myself. But in those moments you have to think, do you serve the piece and get on with it or do you chicken out and go, ‘No, this isn’t what I signed up for, blah, blah, blah?’ And then, the funny thing was, after we’d finished shooting it for the whole day, and people like Miguel Sapochnik, the director by the way, walking past with a cup of tea and a sandwich on-the-go and going, ‘Hi, honey, you all right?’ And I was like, ‘Not really.’ ‘The crew have just been saying we are actually really waterboarding you here.’ And I was like, ‘Yup, you don’t need to tell me that!’”

According to Waddingham, Unella’s final scene was supposed to be even worse than what we saw and end with the Mountain raping her—Waddingham believes that the backlash against Sansa Stark’s rape in season 5 led to the writers abandoning that—but it was changed at the last minute. While Waddingham spoke about being able to push herself as an actor, she also noted that the scene was changed because, as showrunner Dan Weiss put it to her, fans expected that Unella—who fans despised—really needed to suffer upon her demise.

“And it was [showrunner] Dan Weiss that came up to me and went, ‘Look, in the script it says Cersei empties the remainder of her glass of red wine to wake up Unella. People aren’t gonna think that’s enough,’” Waddingham said. “‘What you’ve put her character through, that is not enough retribution for Cersei, especially the kind of person that she is. It needs to be more like a three quarter full [glass], also if we can cheat it even more carafe of wine.’”

When she finished shooting, her voice was so wrecked that she couldn’t speak for two weeks afterwards and has since given her “claustrophobia around water” and has trouble even watching a show featuring a character dipped into the water. All in all, only about a minute and 30 seconds of footage ended up in the show.

It’s not the first time Waddingham compared shooting Unella’s final scene to waterboarding. In a 2019 interview with Still Watching, Waddingham, while discussing her final scene, referred to it as “my torture scene.” Many of the details between the two interviews are the same, but Waddingham noted to Still Watching, that she was strapped to the table for filming when she was told about some of the changes.

You can watch the full interview with Waddingham below.