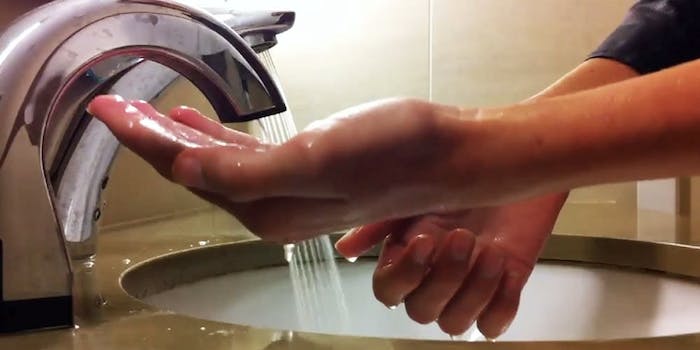 We hate to see it.

Recently, for some reason, the internet has been captivated with body-part washing debates. It all started when a woman inexplicably admitted in a since-deleted tweet that she doesn’t wash her legs in the shower—which was relatable to some people and horrifying to others. Later, the debate moved to washing your feet in the shower, although if you’re already not washing your legs, what’s even the point? And now, we are chagrined to report that the conversation has moved to washing your hands. Just like, after using the restroom.

On Wednesday, writer and media personality Ana Marie Cox tweeted that a woman she encountered in a public bathroom shamed her for not washing her hands after using the facilities.

“I was running late to the studio but had to stop in the building’s restroom to use the loo, and BC OF THE LATENESS, I went straight from stall to the door,” she wrote, in part one of a three-part tweet. “A woman walking out the same time as me TURNS AROUND AFTER WE LEAVE AND SAYS, “So, you’re not going to wash your hands?”

“I am a grown-ass woman with 46 years of experience on this earth & this has *not once happened to me,” she continued. “I wish I had the presence to mind to tell her that I’d love to chat but I was due in surgery but instead I just gawked at her and said ‘I’ll wash them later.'”

“BC I USUALLY DO,” she added, emphasis on “USUALLY.”

Cox went on to state that she had never encountered this woman before in her life and wondered why she thought it would be a good idea to confront her about not washing her hands.

(Apropos of nothing, “but I am pretty sure she can’t be from Minnesota,” should 100 percent be the new “you were at my wedding Denise.”)

At any rate, Cox’s tweet went over about as well as you’d think, and “debate” may be too kind of a description, because—as it turns out—hand washing is something near 100 percent of people can get behind. And some just wondered why in the world she would unburden her soul with this.

U S U A L L Y pic.twitter.com/lG4kYe8Peq

the only part of this I find surprising is that you're admitting to all of twitter that you left a restroom w/out washing your hands. I'm not saying I've never done it, I'm just saying announcing it is not a direction I would have gone in.

Nobody wants to shake hands with your turd lady

And of course, her confession was ripe for the “hate to see it” meme:

than she spent actually washing her hands. you… pic.twitter.com/4WeAbgnjdv

Others lauded the other woman in the scenario as a legitimate hero for calling out Cox:

I’m sorry Ana, but I have to agree with that other woman. pic.twitter.com/m56P85koqS

Cox later claimed that she didn’t touch the door, which did little to help her case:

The most perplexing thing about the whole ordeal is that it probably took Cox about three times as long to tweet this story as it would have taken her to just wash her damn hands. R.I.P. to anyone who accidentally comes in contact with her phone.