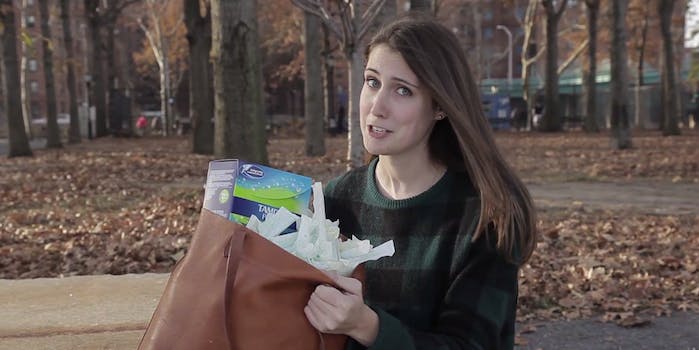 Here’s what tampon commercials by clueless dudes would look like

"This should do it for the week!"

Periods would be drastically different experiences if they went the way some men might imagine them.

Hammerkatz, NYU’s sketch comedy group, got some of those men together (along with, we suspect, a few women who’ve gotten questions from men) to make a tampon commercial presented by the all-male advertising team at Tampax. They’ve never had a period, so naturally they’re the best authority to make a commercial. And well, you’re gonna need a lot of Tampax to cover everything no matter how many times a month it hits.

The utter absurdity of the men’s cluelessness is played off for laughs to the point where most people could roll their eyes, but at one point in time, NASA engineers actually asked Sally Ride if 100 tampons was enough for a 7-day journey in space. (It’s too many, for those wondering.)

But in reality, you’re probably already watching tampon commercials made by men: the ones actually on TV. It’s only taken until now for some advertisers to start straying away from the white pants, blue liquid, and bouts of physical activity and start hitting the uglier—and funnier—side of that time of the month.