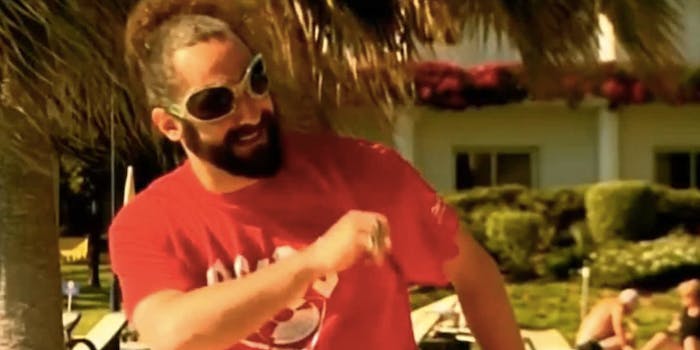 A 43-year-old man has been sentenced to 15 days offline after uploading a song by the pop group Collectif Metisse, copyrighted by Universal.

After threatening its citizens for four years, France has finally suspended a pirate from the Internet.

It’s made possible thanks to the country’s controversial HADOPI, or “three strikes” law, which allows a government agency of the same name to cut off users if they’re caught pirating music or movies three times. HADOPI’s had mixed results: peer-to-peer filesharing is undoubtedly down under the system, but other forms of piracy are up, and it hasn’t led to increased sales for the French music industry.

French tech site PC Impact revealed Monday that their sources claim a few details about the otherwise anonymous pirate: He’s a 43-year-old man and was busted for uploading a song by the pop group Collectif Metisse, copyrighted by Universal.

The man claimed that he didn’t actually pirate the content and blamed an insecure Internet connection. That doesn’t matter to HADOPI and other graduated response programs like New Zealand’s three strikes law and the U.S.’s Copyright Alert System. Under those programs, whoever receives the bill for an Internet connection is held responsible. In fact, in France’s first HADOPI conviction in September 2012, a man was fined after admitting in court that his ex-wife pirated Rihanna from his house.

The case is made all the more convoluted by the fact that France plans to cut the HADOPI program into a several smaller ones spread across several government departments. The change will also remove the option of cutting off a citizen’s Internet access entirely.

It’s unclear if the individual sentenced in this case lodged an appeal in time. If not, the man would be suspended from the Internet for 15 days.