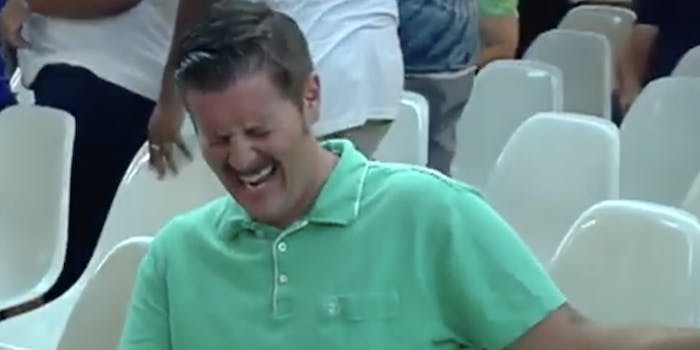 #GreenShirtGuy speaks for many through laughter at anti-immigrant protest

The laughing man is Alex Kack, a Tucson-area comedian and activist.

At a Tucson, Arizona, city council meeting yesterday, officials voted to put a sanctuary city measure on the upcoming November ballot, requiring the city to fully enforce protections for immigrants.

The vote received pushback at the hearing though, and one man’s reaction to it is now a symbol of the fight.

Tucson previously declared itself an “immigrant-welcoming city” in 2012. However, a group of residents is charging the city to fully enforce the sanctuary city designation, which offers protections for undocumented workers.

That is receiving resistance from the local Republican Party.

At Tuesday’s meeting, a vocal pro-Trump couple opposed the “sanctuary city” vote, holding up a pair of signs that read, “Respect Our Laws or We Will Deport You! No Sanctuary For Criminals!”

A woman in a “Make America Great Again” cap also yelled at the attendees and police needed to be called in to calm the audience.

However, what caught social media’s attention was the man in the green shirt, activist and comedian Alex Kack, who was filmed by KVOA News 4 in Tucson, laughing at the couple.

Scene inside a Tucson City Council Meeting. Officials voted to put a "Sanctuary City" measure on the November ballot pic.twitter.com/mEh4PNj0Wo

But more important:
This is exactly how you disarm them.

Laugh.
Laugh in their faces.
Laugh at them for the embarrassment they are.

He’s caught wind of the hype and is grateful for it.

This is unreal, you guys are wild.

In all seriousness they were there to protest Tucson's citizen lead Sanctuary Intiative which is under attack by the local GOP, you can help at: https://t.co/iOCDLN5mGd. #defendsanctuary #GreenShirtGuy