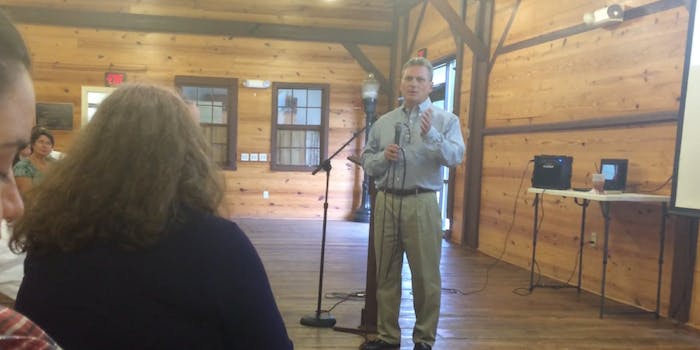 More than 10,000 rape kits have gone untested in the state.

A Republican congressman is eager to help clear rape kit backlogs—unless those rape kits come from jurisdictions in sanctuary cities.

At his Aug. 8 town hall in Homerville, Georgia, Rep. Earl Carter told constituents that as congressman, he could help clear the state’s rape kit backlog with state grants—with assistance to sanctuary cities being the one exception. Kathryn Shelton, a Georgia voter, sent Jezebel the footage of Carter’s meeting.

“There are grants available, and we’ll do everything we can to help,” Carter said. “Unless they’re a sanctuary city.”

“Like, you wouldn’t provide grants to test rape kits if it was a sanctuary city?” Shelton asked.

When asked if he felt the move served his constituents, Carter agreed, saying, “If you’re a sanctuary city, that means you are refusing to enforce our immigration laws here in the United States, and if you’re doing that then I don’t want to be sending you any federal grants to go to your city.”

Rep. Carter, as you may remember, was most recently in the news for saying he’d like to “snatch a knot” in Sen. Lisa Murkowski’s “ass,” in regards to her planning not to vote for the Obamacare repeal.

As of January, Georgia had more than 10,000 untested rape kits, according to the End The Backlog program. More than 2,000 untested kits were discovered in the Atlanta metro area in 2015, with more than 200 untested pediatric kits found in 2016.  In Georgia, DeKalb and Clayton counties, Atlanta’s fourth- and fifth-most populous counties, are both sanctuary areas.