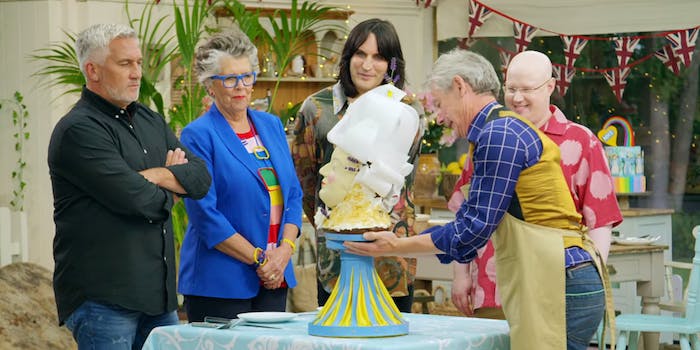 Another season of The Great British Baking Show has begun, bringing the U.K.’s ultimate comfort watch to our shores. But the arrival of the latest season on Channel 4 and Netflix also brought forth the stuff of nightmares.

There is a certain amount trial-and-error in GBBS. After all, all of the competitors are amateur bakers and one of the show’s three weekly challenges is a technical challenge where everyone is given the same ingredients and a scaled-down recipe and asked to perfectly recreate it. The season 11 premiere (which is referred to as Collection 8 on Netflix) of GBBS blew that out of the park with its showstopper, which is usually the last chance for a contestant to go big or go home.

The task, as GBBS co-host Matt Lucas put it, was to “make a cake bust depicting your personal celebrity hero”—a task that the bakers had four hours to complete.

“Your 3-D cake bust must have a head,” co-host Noel Fielding explained. “And it must be made…mainly from cake. Although you can use some other edible details.”

Four hours and a certain amount of frustration (paired off with a nearly toppled bust) later, the contestants finished their tasks. And, well, almost none of their celebrity cake busts went as well as they planned; for a little bit, it felt like GBBS went straight into Nailed It! territory. GBBS debuted last Tuesday, but the cakes resurged once U.S. viewers got to watch it on Netflix Friday.

There are a couple of reasons for the mere shock factor of just how badly nearly all of the busts were. For one, as each baker explained what they planned to make, we’re shown GBBS’s trademark illustration indicating the most idealized version of that bake. Those original depictions that set our expectations, which are drawn by Tom Hovey, are to “illustrate what the bakers planned to create, not what they actually baked in the tent,” he told Vulture in 2018.

Despite the showstopping cake busts striking out, some of the results turned out better than others. For instance, Rowan’s depiction of Queen Marie Antoinette looked fairly decent (although he wasn’t able to include choux buns for the queen’s hair). Peter’s bust of Scottish race car driver Sir Christopher Hoy is overwhelmed by the bottom half to the point where the head looks comically small. (It helped him get Star Baker for the week, so there is that!) And Laura’s Freddie Mercury bust looks more like a chibi Freddie Mercury, but it’s undeniably him.

David’s bust of Blink-182’s Tom DeLonge is a prime example of how a concept can go wrong. His finished product is a mix of a Simpsons character and the “How do you do, fellow kids” meme—which would be great if that had been what he was going for.

Even DeLonge managed to have a go of it.

Sura, who already won fans over after her intro package showed her walking a majestic black cat on a leash in London and her horror after accidentally knocking over David’s pineapple upside-down cakes, created a bust of Sir David Attenborough. But her bust was unevenly balanced, which almost led to her own floor disaster, and the more realistic eyes gave an unintended eeriness to the cake.

Marc arguably had the most iconic rendering to recreate: Ziggy Stardust. But that meant that Marc had the furthest to fall if his cake bust failed. Even the official Twitter account for GBBS (which is called the Great British Bake Off in the U.K.) couldn’t help but make fun of the bust. At least he nailed the lightning bolt!

Hermine tried to recreate Lupita Nyong’o, but the execution went so off-course that she even included a note of “guess who” alongside her bust.

Fortunately, just about everyone made it out of cake week in one piece (apart from Loriea, who was sent home). But the disaster that was GBBS’s celebrity cake bust showstopper challenge does have a silver lining: If that’s what it looks like when you’re made of cake, we have some great news for anyone who might think they’re cake right now.