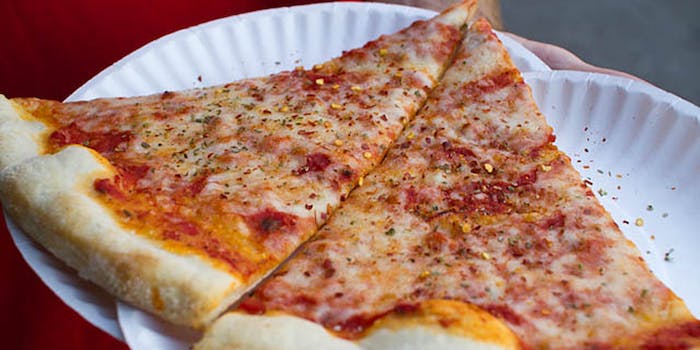 Why don’t politicians know how to eat pizza? An investigation

What kind of goon eats pizza this way?

If you’re a heathen and eat pizza with a knife and a fork in public, more power to you. Just know you’re eating it incorrectly.

Even if you’re not a New Yorker—and, full disclosure, I’m not—it’s common knowledge that there’s a right way to consume a slice: Fold it in half (with your hands) and chow down (while holding it in your hand).

And there’s a wrong way: eating that pizza with utensils. Even the governor of Ohio should realize this.

John Kasich go home! You don't come to NY and eat pizza with a fork and knife. disgraceful!! get outta here #Trump pic.twitter.com/U7bWO9zvh1

If @C0nservativeGal is that angry now, just wait till she finds out that her own candidate did the same thing. The most egregious example of politicians eating pizza with utensils was the Sarah Palin–Donald Trump fiasco in 2011, well-documented (and skewered) by The Daily Show.

Not even the freakin’ mayor of New York City is immune to this buffoonery. In 2014, Bill de Blasio was caught eating his pizza this way.

@Marcotti @MattGelb As a matter of fact I do… pic.twitter.com/QAzi96jA20

For Christ’s sake, dude, not even Pizza Rat makes this mistake.

But as noted, the latest entrant into the Pizza Hall of Shame is the aforementioned Ohio governor, a fellow named John Kasich. (Who did, to his credit, eventually pick up the slice like a real human being.)

John Kasich just ate his pizza with a fork and knife pic.twitter.com/KQ0UXCoJjN

How disgusting. Why did this happen? How could this happen? Though he doesn’t deserve the benefit of our doubt, Kasich explained, via Politico: He said the pizza from Gino’s was “scalding hot” and that his wife actually praised him for his ability to use simple tools.

“By the way, I want you all to know that despite all the criticism I’m getting, my wife—who heard about this on the Twitter—called me last night and said she was proud that I had finally learned how to use utensils,” Kasich said.

Yes, the potential president of the United States should know how to operate a fork and a knife. But there’s a time and a place for that, and the pizzeria photo-op for a presidential campaign is not it.

So let’s break this issue down and treat it with the reverence it deserves. Why do politicians think scarfing down pizza with a knife and fork is OK?

You want people to know that you feel their pain

Or something like that. According to a piece from Cosmopolitan, research indicates that if you eat pizza with a fork and knife, you’re methodical and a supporter of others.

“You’re a very steady and stable person, the kind of friend every woman needs in her life. You’d make sure everyone has a slice before you grab your own and would likely be hosting the pizza party in a very warm, relaxed living room so all your girlfriends can gab over a glass of wine too. And because you’re so system-oriented, you can bet you like routine—the pizza guy knows exactly what you’re going to order before you even pick up a menu. So keep calm and carry on, girl—you need plenty of time to enjoy bite by bite, before the pie gets cold.”

But you know who else is methodical? Serial killers.

They do it in other countries

Eating with your hands can be messy

As if that’s some excuse to use the knife and fork. See, there are these things called napkins that are great for wiping excess grease, marinara sauce, cheese, crumbs, and other shmutz off your face. Try them sometime. If you don’t want to take the risk of making a mess, eat a damn salad. (Actually, if you’re running for office, maybe you should. From all the research I’ve read, salads are healthier than pizza. But don’t use too much dressing, because, then you’d be at risk—again—of making a mess.)

Don’t want pizza sauce on your suit? Simple. Take off the suit. Eat in your undershirt and underpants. I don’t care if you’re in a restaurant. Eating pizza with your hands while in your boxers is more dignified than eating it with a fork and knife dressed in a tux.

Actually, politicians don’t give a fuck about you

They only care about the pizza lobby. And it makes for some unusual bedfellows. Is this really what passes for bipartisanship these days?

None of this, though, gets to the heart of the matter, which is that Kasich said the pizza was too hot. Look at the GIF again.

John Kasich just ate his pizza with a fork and knife pic.twitter.com/KQ0UXCoJjN

Does he blow on the pizza to cool it down? Does he let the piece simmer on his fork for an extra few seconds to allow some steam to escape? Does he give any indication that the temperature is too torturous for his tongue? No, he stuffs it into his mouth like he’s shoveling coal on the Titanic (that’s actually not a bad metaphor for how this faux pas will eventually sink his chances to be president).

Fortunately for you, dear reader, nobody will care if you eat pizza this way. People will think you’re just some silly tourist who stopped off for a quick snack while on your way to make dinner reservations at the Olive Garden in Times Square. So don’t sweat it until you run for office.

Oh, and there’s also this piece of advice. If the pizza is too scalding for your hands, John, just wait two goddamn minutes for it to cool down.