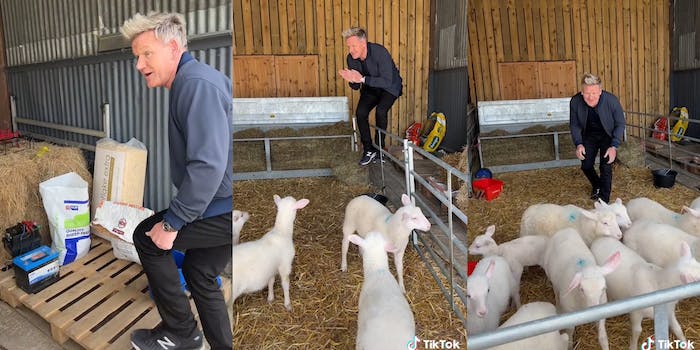 Vegan TikTokers criticized Gordon Ramsay for joking about eating lambs—but the resulting controversy is now totally out of control.

TV chef Gordon Ramsay has sparked a heated debate about ethical meat consumption after posting a TikTok where he approaches a group of lambs and says, “Yummy yum yum! Which one is going in the oven first?”

In the six days since Ramsay posted this TikTok, the resulting controversy has spiraled out into debates about veganism and differing cultural attitudes to animal slaughter—along with PETA suggesting that Ramsay’s children should disown him in protest.

The Lamb sauce was still not found in the making of this video…..

Some of the top responses to this TikTok came from vegans who saw it as an example of animal cruelty, with one TikToker saying Ramsay was seeking attention by “mocking baby animals who are about to have their throats cut.” Another vegan TikToker described it as a “cruel display.”

Ramsay has a history of riling up vegans, including a feud with the banned-from-TikTok internet personality That Vegan Teacher. So this TikTok is arguably a successful example of Ramsay trolling his detractors, with predictable results.

But while some vegans did object to the lamb video, only a couple of those response videos broke past 10,000 views, compared to the 10.7 million on Ramsay’s original post. As TikTok dramas go, it’s not as widespread as you might think. Most of the popular reactions are just people commenting on the existence of the controversy, spurred on by media coverage of the initial Ramsay vs. Vegans conflict.

Meanwhile, in the comments section for Ramsay’s lamb TikTok, the reactions are split between people criticizing Ramsay’s behavior, people who find the TikTok funny, and people mocking vegans and/or animal rights proponents for being too “sensitive” and “soft.”

Weirdly, once this controversy reached Twitter, it transformed into something else. Instead of arguing about veganism, Twitter users reacted as if Ramsay was being criticized by hypocritical carnivores who don’t know where meat comes from:

In a grand Twitter tradition, it seems likely that many of these commenters didn’t read the article they’re quote-retweeting.

There are dozens of similar tweets sharing the same NBC article with quips like, “Are people shocked that meat comes from animals?” and “TikTok has just discovered where meat comes from apparently,” perpetuating an outrage cycle that isn’t based on anything real.

Gordon Ramsay’s lamb TikTok did provoke some backlash from vegans and vegetarians, some of whom accused him of animal cruelty. But there’s no evidence that many meat-eaters were making the same complaints—or that his TikTok followers were shocked to learn that lamb meat comes from lambs.

The Daily Dot has reached out to Gordon Ramsay’s representatives for comment.